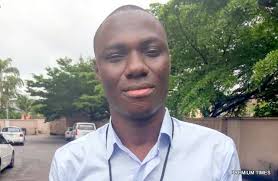 Nigeria’s State Security operatives are said to be looking for and to arrest Mr SamuelOgundipe and extract from him the source(s) of his journalistic reporting on the feud between the NSA, Chief of Staff, & the Chief of Army Staff, Mr Chidi Odinkalu wrote on twitter.

Mr Odinkalu is an activist and the former Chairman of Nigeria’s National Human rights Commission, NHRC.

In the widely circulated memo as seen below, It was revealed that Kyari, contrary to protocols and in a situation akin to acting in the capacity of the President and Commander-In-Chief of the Armed Forces, convenes and chairs meetings with heads of defence, security and intelligence agencies with their supervising Ministers in attendance.

Ogundipe had EXCLUSIVELY broke the news how Chief of Army Staff, Tukur Buratai, appears to have taken sides with Abba Kyari in the chief of staff’s raging battle against the national security adviser, Babagana Monguno.

In a move decried within the national security circles as being aimed more at “cutting the NSA to size” than maximising personnel efficiency, Mr Buratai ordered the immediate withdrawal of top army officers attached to the Office of the National Security Adviser (ONSA) earlier this month.

Another twitter user, Mr Ayobami familiar with the threats to the Premiumtimes Journalist also did a thread detailing why Ogundipe has been forced into hiding.

This is not the first Mr SamuelOgundipe is dealing with Nigeria’s Secrete Police – in 2018, he was arrested by the Police HQ for failing to reveal his source .

Nigerian police should immediately release journalist Samuel Ogundipe, drop all charges against him, and cease efforts to pressure him to reveal any journalistic sources, the Committee to Protect Journalists said today.