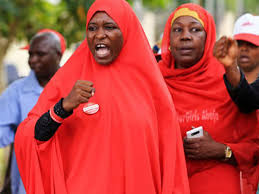 A chieftain of the All Progressives Congress, Eze Chukwuemeka Eze has called for the arrest of Nigerian activist Aisha Yesufu.

Mr Eze in a statement expressed concern over the delay in the arrest of Aisha Yesufu, of the Bring Back Our Girls (BBOG) campaign group. Eze Chukwuemeka Eze is an associate of Nigeria’s Transport Minister, Mr Rotimi Amaechi.

Eze alleged that the BBOG Co-coverner, was threatening erstwhile Governor of Rivers State and incumbent Minister of Transportation, Rt. Hon. Chibuike Rotimi Amaechi – he added that Mrs Yesufu had also said Amechi will face imminent assassination from the outlawed Boko Haram terrorist group and then questioned why one week after, the video – Mrs Yesufu is still free.

The statement issued to NewsWireNGR reads, “In the said clip, Madam Yesufu claimed that Dr. Amaechi managed to escape attack by the Boko Haram terrorist group in Kaduna, but however expressed confidence that the terrorist group will definitely come back for the Minister any moment.

The Statement continued, “According to the video clip, Aisha Yesufu asserted vehemently,  Amaechi, “YOU THINK YOU ARE SAFE BECAUSE YOU HAVE ESCAPED…” an obvious reference to a purported attack on a passenger train enroute Kaduna, as the Minister made his way to honour his friend, the Kaduna State Governor, Mallam Nasir El-Rufai.”

Although the Minister has denied the attack, but Yesufu’s insistence that although the Minister was attacked and only escaped death by whiskers, he may not find an escape route in a subsequent attack. This is a good prove that there is a plot to assassinate the Minister and that Aisha Yesufu is an accomplice to that satanic plot.

The party chief said Nigerians should not for any reason take such a threat as one of those noisemaking tactics of this angry failed woman. He therefore urged the Security Agencies to arrest  Aisha Yesufu to enable her explain in details the very essence of her video and why she is so sure that the Minister is not safe.

Chief Eze advocated for improved security around Dr. Amaechi and other government officials, stressing that it will not be taken for nothing, should any harm come the way of the Minister.

“I ask that the security around the Minister and other government Officials be beefed up”.

“Those of us who are associates of Amaechi will not take it kindly should any harm in any form happens to the Minister”.

Eze highlighted that Amaechi while as Governor of Rivers State has expressly stated that if the Nigerian Government does not do the needful, the menace of Boko Haram and other similar criminal setups will constitute a high risk development in the country in the nearest future. Today as a great statesman, his prediction is coming to pass. If other Segments of government in Nigeria have emulated the high standard that Amaechi set up during his days as Governor of Rivers State, the menace of Boko Haram would have been reduced to the barest minimum.

One of the steps that Amaechi took to ensure security of Rivers State was purchasing high-tech security gadgets which were used to equip properly trained Police men in Rivers State. This led to the rapid reduction of crime and criminality in the state to the barest minimum that in one year there was no single armed robbery attack or kidnapping incident in the entire Rivers State. Amaechi is truly a patriotic leader whose insight and vision can be the solution to most of the problems pervading us as a nation, Eze maintained..

Amaechi has the single honour in governance of this country when in a swoop, he employed over 13,500 Nigerians both Northerners, Yoruba’s, IBO’s as Teachers to reduce the skyrocketing rate of unemployment in Nigeria. No other government in Nigeria has achieved that feat.

Apart from all these he set up Agricultural Centres in most areas of the State providing all manners of food stuffs to ensure that hunger was banished in Rivers State at the period of his reign. As we are all aware hunger is the main cause of insecurity in Nigeria today.

During his reign, Rivers State was first in all areas of education in Nigeria. He established scholarship schemes to ensure that the less privileged get access to quality education. His foreign educational scheme still stands as a reference point to any serious government in Nigeria to copy. Lack of education amongst our children is one of the major causes of insecurity in this nation today.

Eze highlighted that Amaechi has the singular honour among African Leaders to have based on his uncommon feats influenced the UNESCO to award Port Harcourt the capital of Rivers State a world status as the 2015 UNESCO World Book Capital City. Which other Government have achieved that in Africa, Eze asks.

He gave meaning to governance in Nigeria when he assumed office at various occasions as the Chairman of Speakers of State Houses of Assembly and Chairman, Nigeria Governors’ Forum.

“What has Amaechi not done to ensure that the vision of the founding fathers of this nation is achieved. Today as the Minister of Transportation, he has proved beyond every doubt that he has the key to unlock the potentials and greatness of this nation, so how on earth should he be targeted for assassination as claimed by this Aisha and the Security Agencies are just watching”, Eze lamented.

“Let me reiterate that no harm should for any reason befall this man whose love for one united Nigeria is well known to all and sundry. His famous statement that he doesn’t believe to either East, West, South or North, but one indissoluble, virile, egalitarian and united Nigeria is still ringing bell in the ears of patriotic Nigerians”.

“Let me conclude by stating that although the enemies of progress will surely gather but they are gathering without God’s approval and their gathering against an innocent soul will surely boomerang on their heads except God is no longer God”, Eze avowed.

To fight crime, State security outfits must register with Civil Defence and get licence issued