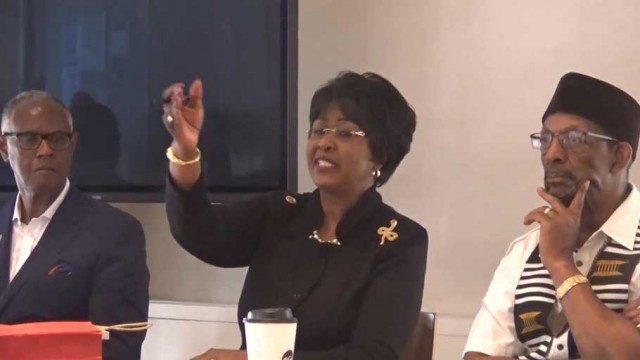 Dr Arikana Chiyedzo Chihombori, also known as H.E Dr. Arikana Chihombori Quao is a very interesting woman. Recently dismissed from her position as the AU’s ambassador to the U.S., she has become something of a rallying cause for many with Pan Africanist leanings because of her pronouncements and posturings while she was in office.

When she was relieved of her position a few days after making a pointed public criticism of France over its perceived exploitative relationship with 14 of its former African colonies, many got the idea that she was the victim of a high-level diplomatic gang-up. She was the plucky African underdog speaking truth to power who was then unceremoniously kicked out for saying the truth at the behest of the French government, or so it seemed.

However documents exclusively obtained by NewswireNGR from an AU whistleblower tell a completely different story about what exactly took place behind the scenes that led to Chihombori-Quao’s sacking. The whistleblower provided a trove of official documents, many of which can be viewed at the bottom of this article, showing that while the AU ambassador was giving inspiring speeches denouncing neo-colonialism and energising the African diaspora in Washington D.C., she was actually administering the AU’s affairs in DC like a stereotypical African dictator – sticky fingered, nepotistic and with zero regard for due process and ethics.

For the first time, NewswireNGR brings you an authoritative sequence of events that culminated in Chihombori-Quao’s sacking.

A veteran of Zimbabwe’s power circles under Robert Mugabe, Dr. Chihombori-Quao made a name for herself as AU ambassador to the U.S. by making the sort of pointed and unapologetic statements about colonialism and African pride that naturally appeal to an African diaspora that is weary of its clear and obvious secondary position in the western world.

Where others have been more circumspect and diplomatic with their pronouncements, she was the type to speak openly about issues like western collaboration in the looting of the DRC’s resources, or the predatory relationship France has with its African colonies.

The timing of her firing, coming almost immediately after she made a public appearance excoriating France for its colonial misdeeds raised more than a few eyebrows and had a number of people pointing fingers at the AU for allegedly kowtowing to the demands of the French government.

NewswireNGR can confirm however, that Ambassador Chihombori-Quao was actually under prior investigation for several issues relating to fraud, embezzlement and unauthorised fundraising under false pretexts.

Documents received from a whistleblower show that in addition to misuse of authority to evade due process in hiring and contracting for several well-paid jobs, Dr. Arikana went as far as launching unauthorised GoFundMe campaigns purportedly to help victims of cyclone Idai in Mozambique and soliciting funding for a fictitious project in Zambia called “Wakanda One.” The 18-page investigation report attached below is the result of months of internal AU investigations into her activities in Washington DC.

Following her ouster as ambassador, Dr. Chihombori-Quao has predictably doubled down on her rhetoric, insisting that she is the victim of diplomatic skullduggery instigated by powerful countries that feel threatened by her public pronouncements. In an interview with NPR’s Eyder Peralta in November, when confronted with allegations of financial and ethical misbehaviour, she claimed that she is the victim of a “witch hunt,” and accused the staff of the AU’s DC office of setting her up.

“They don’t come to work. When I am out of town, they don’t show up at all. And they are stealing, by the way – stealing – frivolous claims for education, frivolous for health care. It is a horrible office. The staff is stealing money – no question about it.”

Many seem to have bitten Dr. Chihombori-Quao’s bait, most notably those in the diaspora for whom the voice of a “fearless African” no doubt served as a temporary relief from the reality of living in hostile circumstances.

The AU itself has become so frustrated with these media games that it issued a communique openly condemning the shenanigans – something that an organisation as passive as the AU rarely does.

While it is unlikely that Ambassador Arikana’s reputation will suffer on the African continent as a result of her many alliances and friendships, the revelations will go a long way toward addressing the long-standing misconception that performative “Pan Africanism” necessarily means that the individual involved actually has positive intentions for Africa.

As her example shows, it is often little more than just a smokescreen.