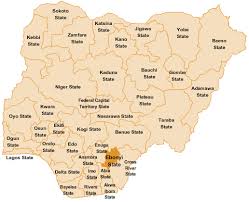 A middle-aged man, Mr Chinasa Ogbaga has allegedly killed two of his Children and left one fatally injured in Okpuitumo community in the Abakaliki local government area of Ebonyi.

Mrs Loveth Odah, the Police Public Relations Officer (PPRO) confirmed the incident in an interview with the News Agency of Nigeria (NAN) correspondent on Monday in Abakaliki.

According to her, the suspect went to the estranged wife’s home where he took the children on the pretense of taking them home to cater to them for the Christmas celebration.

She said the suspect instead diverted and veered off into a nearby bush where he allegedly slaughtered the children with a cutlass.

Odah said that the suspect had been arrested while investigations were currently ongoing to unravel the cause of the incident.

She said that the suspect would be arraigned as soon as police investigations were concluded adding that the victims were male and female children aged six years and four years respectively while the injured victim is two years old.

“The suspect, a vulcanizer who is already in Police custody allegedly killed his two children and inflicted heavy multiple injuries on one on Dec. 16 at Egwuagu, Okpuitumo in Abakaliki LGA.

“The suspect is arrested and currently been detained at the state police headquarters.

“No individual has a right to take another’s life and as a law enforcement agency committed to securing lives and property, police will ensure that justice is served by bringing the suspect to the book”, Odah said.

On security during the Christmas celebration, she said that there was no reported case of security breaches in any part of the state during the Yuletide.

She assured the public that police would not relent in ensuring tight security during the New Year celebration and appealed to residents to report any suspected criminal breaches in their areas.

Related Topics:NewsEbonyiHuman Angle stories
Up Next