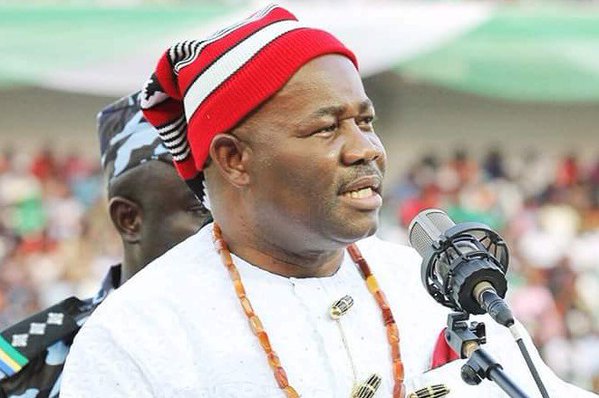 Akpabio, who was a former Senate minority leader, stated this in a letter addressed to the National Chairman of the All Progressives Congress, Adams Oshiomhole.

The Minister,  in the letter,  dated  December 2, 2019, but obtained by our correspondent on Wednesday, said a huge responsibility has been placed on him as Minister of Niger Delta Affairs

Akpabio said he won’t abandon a critical national assignment placed on him by Major General Muhammadu Buhari (retd) in pursuit of a rerun election.

He urged the party to write the Independent National Electoral Commission, in line with Sections 33 and 35 of the Electoral Act, 2010, and submit a replacement to run in his place.

Akpabio in the letter urged the national chairman of APC to prevail on the chairman of INEC, Professor Mahmood Yakubu, to redeploy the State Electoral Commissioner in Akwa Ibom State, Mr. Mike Igini if free and fair elections must be held.

He said, “I wish to recall that I was the candidate of the All Progressives Congress (APC) at the Akwa Ibom North-West Senatorial District Election held on the 23rd day of February, 2019.

“Upon the declaration of Christopher Ekpenyong of the Peoples Democratic Party (PDP) as the purported winner of the election by the Independent National Electoral Commission, I challenged same at the National and State Houses of Assembly Election Petition Tribunal, Uyo, Akwa Ibom State.

“Being dissatisfied with the decision of the majority judgment and upon the erudite points of law and conclusion contained in the minority judgment, we appealed to the Court of Appeal, Calabar Judicial Division which in a unanimous decision delivered on the 9th day of November, 2019, allowed our appeal and set aside the Judgment of the Lower Tribunal.

“I have taken into consideration the critical national assignment bestowed on me by Mr. President which will be of immense importance to Nigerians and in particular the indigenes of the Niger Delta region and have resolved to remain as a Minister of the Federal Republic of Nigeria to further discharge my contributions and services to our great fatherland.

“It is on the premise of the foregoing and particularly in line with the provisions of Section 35 of the Electoral Act, 2010 (as amended) that I want to formally and voluntarily withdraw my candidature as the candidate of the All Progressives Congress (APC) for the forthcoming Court ordered Re-run Election for the Akwa lbom North-West Senatorial District.

“It will be inappropriate in the circumstance and pursuant to Sections 33 and 35 of the Electoral Act, 2010 (as amended) for the party to immediately communicate this withdrawal to the Independent National Electoral Commission and forward to her the name of another candidate of the party to replace me at the Court ordered Rerun Election for the Akwa lbom North-West Senatorial District.

“I want to seize this opportunity to thank our formidable party, the All Progressives Congress, its leadership at the state and national levels for availing me the party platform and the immeasurable support I received throughout the period of the election and beyond.

“Mr. Chairman, may I advise that the National Working Committee of our party should reiterate our earlier plea to the chairman of Independent National Electoral Commission to redeploy Mr. Mike Igini (the Resident Electoral Commissioner) from Akwa lbom State if a free and transparent re-run exercise is to be guaranteed,” he added.

The Court of Appeal, had in November, ruled that a rerun election should be held in some parts of Ikot Ekpene Senatorial District.

Akpabio had challenged the declaration of Senator Chris Ekpenyong of the Peoples Democratic Party as the winner of the February 23rd election.