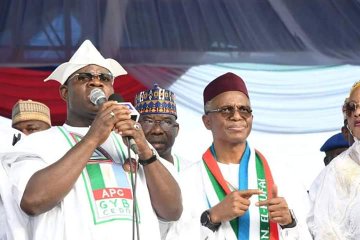 The Chairman of the All Progressives Congress  Campaign Council for Kogi governorship election, Mallam Nasir El-Rufai, on Thursday  appealed to  the people of Kogi State to forgive Governor Yahaya Bello.

The verbal appeal by Nasir El-Rufai, was not enough, he had to kneel before the massive onlooking crowd during the campaign while Bello, the candidate he was begging for was standing and smiling behind the Kaduna Governor during the rally.

In stating his case in support for Bello, the Kaduna Governor told the crowd, that the APC candidate was a young man who was bound to make mistakes, but had learnt from his mistakes and deserved forgiveness from the Kogi electorate.

The Kaduna State governor was speaking at the grand finale of the APC campaign rally ahead of Saturday’s governorship election and Kogi West senatorial rerun.

“We are here not only to campaign for the second term of Governor Bello but to bury the Peoples Democratic Party once and for all.

“The PDP had ruled Kogi for 13 years but what he has (Bello) done in three years, the PDP has not done in 13 years.

“People say Bello is a young man  and a young can make mistakes and learn from them, so, I hereby beg you all to forgive Yahaya Bello. He loves Kogi, he has given the young ones better opportunity.  He has empowered women; we must not repeat the mistakes of the past we must not allow evil to prevail. We must not allow the memory of our great leader, the late Prince Abuvakar Audu, to be in vain,” he said.

Interestingly, Nasir El-Rufai was not the only one that begged, the wife of President Buhari, Aisha, also joined in the begging for the re-election of Bello, and she went a step further to explain why Bello was not so “competent” – She said he was unable to pay salaries because of the verification exercise that was organised for civil servants in the state.

Addressing the crowd, Mrs. Buhari said, “Let me refer back to Kaduna State governor’s speech where he had to kneel and say the people should forgive and forget.

“Also, my husband used to emphasise on salaries. It took a while before the Kogi salaries could be settled after a long time of verification.

“But this time, vote for him for continuity of payment of salary on time.”

Mrs. Buhar subsequently invited the governor to the podium, saying, “I want Yahaya Bello to talk to you about timely payment of salary.”

Addressing the crowd, the governor said, “We have been paying on time. “The civil servants can attest to that.

“Your Excellency, you directed, you supported and we cleared the salary arrears and we shall continue to pay on time.”

Governor Bello has had difficulties paying workers salaries and pension almost throughout his tenure as governor, he repeatedly accused the opposition Peoples Democratic Party, PDP for embezzling all the funds meant for workers salary.

Three days to the governorship election in Kogi State, the Senate approved promissory notes and bond issuance of N10.069 billion to the state as refund for projects executed on behalf of the federal government.

The approval on Wednesday was criticised by opposition lawmakers who asked that the approval be delayed till after the election.

They were, however, outvoted by majority senators. Kogi, like the Senate and the federal government, is controlled by the All Progressives Congress (APC).