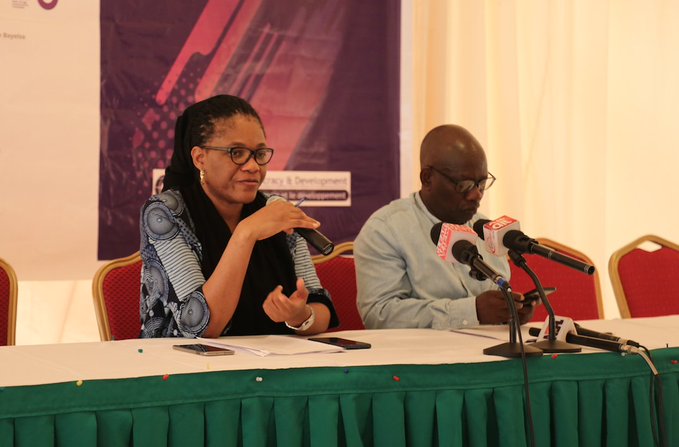 Less than 48 hours to the November 16, 2019 Governorship elections in Kogi and Bayelsa States, the Centre for Democracy and Development (CDD) has tasked political actors and the security agencies to do more to stem the tide of political violence ravaging the two states in the final build up to the polls.

Speaking at a pre-election briefing at the Election Analysis Centre (EAC) in Lokoja, the Kogi State capital the CDD Director, Idayat Hassan warned the tension in the two states is capable of undermining voter confidence and turnout and the credibility of the entire process.

She said, “The rising incidents of violent attacks, vote-buying and intimidation of rival camps make it imperative for the security agencies involved in the process to act with decisiveness and utmost professionalism.”

She said the CDD’s observation of the pre-election environment points to a very volatile political environment, characterised by fierce rhetoric, threats of violence and actual incidents of violence. “A case in point is the recent attack on the State Secretariat of the Social Democratic Party (SDP), whose governorship candidate, Natasha Akpoti is one of the only three women contesting for the governorship election.

CDD further observes that such vicious political attacks in the state are capable of further discouraging marginalised groups, especially women from participating in the political process and particularly from contesting for political office.” The pro-democracy think tank similarly condemned the violent attack on a political rally in Nembe, Bayelsa State, which led to loss of lives.

The CDD warned that being the first set of off cycle elections after the 2019 polls, the character of the electoral processes and outcomes in Kogi and Bayelsa States will serve as a litmus test to assess if the key lessons and experiences from the 2019 general elections have been applied to make subsequent elections credible.

On preparations by the Independent National Electoral Commission (INEC) therefore, the Hassan called on the electoral umpire to leave no stone unturned to deliver a credible polls in the two states. She called on INEC to tie up all loose ends with respect to the deployment of ad-hoc staff to the field.

She said: “The welfare of ad-hoc staff, especially youth corps members should be treated with utmost serious urgency. CDD reiterates that the welfare of INEC ad-hoc is critical to the successful conduct of the election. It is of the utmost necessity to ensure the safety and security of these patriotic men and women who would be making sacrifices and taking risks in a volatile environment to ensure eligible voters exercise their franchise. CDD calls on INEC to consider making special arrangements, including hiring security if there are gaps in providing cover from the normal channels.”

Speaking further on the role of security agencies, the pro-democracy think expressed the view that the effectiveness of the deployment of officers would not lie in the big numbers alone. The Director noted that the neutrality, and the level of professionalism on display by the police personnel on the ground would go a long way to determine how effective they are.

“As experience in previous elections, including the 2019 general elections has shown, without effective oversight, the security agencies could forget their responsibilities and begin to act in connivance with partisan interests to subvert the electoral process.”

CDD monitoring revealed disinformation is tailored to serve several purposes; notably to hurt an opponent, to delegitimize INEC, to counter an attack, to divert attention from critical issues and always seek to gain attention by becoming viral.

“The belief by political parties and candidates that the other side is utilizing fake news to gain votes and win the elections increases efforts in deploying disinformation. Instead of engaging in an issue-based campaign, the political parties have relied more on de-campaigning their opponents.

The CDD observed that the spread of disinformation around emotive issues such as ethnicity and violence got significant traction on social media. We found people are more susceptible to believe this because of the high levels of confirmation bias.”