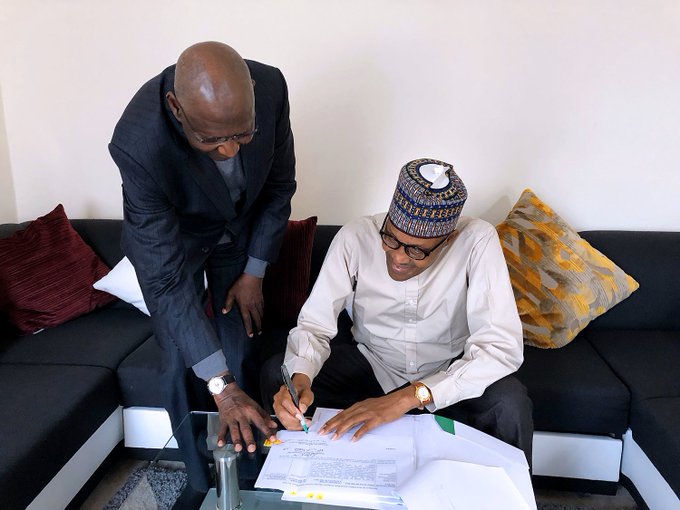 President Muhammadu Buhari on Monday assented to the Bill amending the Deep Offshore (and Inland Basin Production Sharing Contract) Act, as disclosed in a series of tweets on his verified Twitter handle.

President Buhari tweeted, “This afternoon I assented to the Bill amending the Deep Offshore (and Inland Basin Production Sharing Contract) Act. This is a landmark moment for Nigeria; let me use this opportunity to thank the National Assembly for the cooperation that produced this long-overdue amendment.

“You will recall that in my 2020 Budget Presentation Speech before the National Assembly in October, I highlighted the need to urgently review the fiscal terms for deep offshore oil fields, to reflect current realities and to ensure increased government revenues.

“Now, a month later, we have together with the 9th National Assembly made history with the passage and the signing of the amended Bill into law. We will continue to work together to deliver on all our promises to ensure inclusive growth and enhance the welfare of all Nigerians.”

Meanwhile, The Chief of Staff to the President, Abba Kyari, had on Monday flown to London with a bill to President Muhammadu Buhari, who is in London on a private visit, for signing.

Buhari, who will be in London for the next two weeks, failed to transfer power to Vice-President Yemi Osinbajo as he had done several times in the past.

The refusal by Nigeria’s President Muhammadu Buhari to hand over power to his Vice President, implies that all memos, bills and other documents requiring the President’s signature must be taken to London for signing.

The Presidency Monday, took a swipe at critics that have condemned President Muhammadu Buhari’s alleged  frequent foreign trips, declaring that the President can govern from anywhere.

The Presidency said that President Buhari’s oversea trips have yielded a lot of advantages to the country.

In what was titled,  “President Buhari’s active diplomacy is a big plus, not a problem.,” the Senior Special Assistant to the President on Media and Publicity, Mallam Garba Shehu, noted that unlike past leaders who demanded kick-back before awarding contracts, the President has abolished that old ways of doing things.

According to him,” For one thing, President Buhari’s travels have not been excessive by the standards of this country’s past leaders and those of his counterparts in other countries. Given advances in modern travel and technology, a leader can maintain communication and govern from the air, on the road or at the sea.

“Given the advances made with satellite feeds, a leader needs not to be tied to his desk to make important decisions. The days of frequent travel by leaders is the new norm, it is not something that will go away no matter the volume of crocodile tears shed by a critical opposition.”

Continuing, he said,” Roughly three years ago, President Muhammadu Buhari visited the Kingdom of Morocco. He asked King Mohammed VI to give Nigeria from their rich phosphate mineral so that fertilizer can be produced here at home for the teeming farming population. Agreement reached, President Buhari set up a Presidential Fertiliser Initiative in his office.

“Three years down the road, 24 moribund blending plans are now working, providing 100,000 direct and indirect new jobs to Nigerians. The cost of fertilizer is down by more than 50 percent. Nigeria makes a saving of USD 200 million used for its annual import and a further N60 billion in budgeted annual subsidy.

“Nigeria wanted to build a power plant at Mambilla in the Northeast. The plant design had been made in 1959, a year before independence. We have dreams of modernizing our railway system because, without power and railroad, National development will continue to be a pipe dream.

“In planning for his trip to Beijing for a meeting with President Xi Jinping, President Buhari rightfully chose to prioritize his requests, put Lagos-Kano railway and Mambilla power plant on top: President Xi’s word is the silver bullet. Today, China is giving these projects together with the finance and many more.

“On the recent trip to Russia, President Buhari had a wish list that included railways, power projects and military procurements. He had a wish to get the Russians who own the Aluminum smelter plant, built at a whopping USD 4 billion to operationalize it; Ajaokuta Steel plant built at a similar cost, with 20,000 engineers trained to operate it, many of whom are now dead from hunger and lack of engagement is another 40 year – old problem.

“To these and others, President Putin held the keys to the solutions. President Buhari asked, and he was given. It will take volumes of books to document the achievements of these trips.” Shehu’s reaction he explained was as a result of bashing on the President in the media including the social media blogs and jokes, through funny cartoons, adding that” there is a mistaken sense that active diplomacy is the cause of some kind of governance deficit, assuming there is any.” He said,” Channels Television, last night confronted me with a litany of countries the President visited this year and the number of days he spent abroad. The mistaken opinion among many is that the President spends too much time abroad and this is affecting his domestic responsibilities.

“The reality is very different. The success of the visits to Morocco, China and Russia reported here represent just a fraction of the achievements recorded. Many countries and major corporations have listened to our leaders and agreed to come here and put their money in the economy in win-win deals.

“In the last few years, global giants like Siemens, Toyota, Hyundai, General Electric (GE), among others are talking to Nigeria about their commitment to investing billions of dollars through manufacturing and other forms of Foreign Direct Investment.