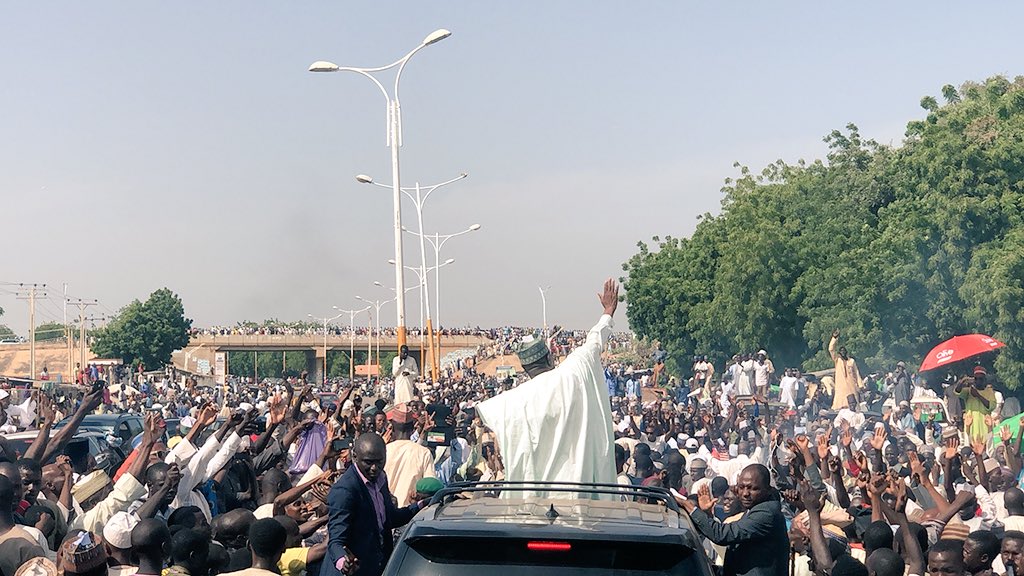 The police command in Sokoto has confirmed the death of one person as a result of stray bullets fired when suspected hoodlums attacked governor Aminu Tambuwal’s motorcade on Saturday.

Cordelia Nwawe, the command’s spokesperson, said one other person who was injured during the incident had been hospitalised.

NAN reports that the PDP had organised a reception rally to welcome Tambuwal after his failed attempt to secure the 2019 presidential ticket of the party.

The governor was received by a crowd of supporters at the Sultan Abubakar III International Airport, Sokoto and went in a motorcade to the government house.

The event was, however, not-hitch free as political thugs armed with dangerous weapons destroyed billboards, building structures and vehicles bearing inscriptions of the opposition party.

A car bearing the APC logo travelling to Sokoto from Bodinga was also set ablaze by mobs along the Sokoto State University.

The motorcade was then forced to stop along Gawon Nama, near the resident of senator Aliyu Wamakko, when another set of mobs carrying arms confronted it.

It took the efforts of security operatives to get it moving again.

A relative of the deceased who pleaded anonymity told NAN that the deceased, Imran Ahmad-Alkanci, was on his way home after visiting family relations when the incident happened.

The source said the 22-year-old was trying to get a commercial motorcycle when the bullet hit him.

A week after his most impressive performance at the just concluded Peoples Democratic Party (PDP) elective presidential convention in Portharcourt, Rivers state, Governor Aminu Tambuwal on Saturday returned to Sokoto in high spirit with a resolve to ensure maximum support for former Vice President Atiku Abubakar for a landslide victory at the 2019 polls.

” I accept the outcome of the primary in good fate and ready to mobilise support for our presidential candidate for victory, ” Tambuwal stated.

The governor however warned opposition APC in the state to mind its utterances or else he would not hesitate to expose the rots.
According to him “when I assumed office in 2015, Sokoto elites advised and appealed to me to draw a line and begin on a clean slate of affairs and not to look back on the activities of past government. But if they choose not to guide their utterances, I will ignore the earlier call which will not make their stay comfortable in the state.”

He described the outcome of the PDP elective convention as the will of God that he did not emerged the standard candidate of the party.

Tambuwal while addressing thousands of jubilant supporters and well wishers at the Government House, Sokoto also thanked the delegates for their support.

He also called on PDP supporters in the state to avoid politics of violence and promote free , fair and issue based politics while urging opposition APC to do the same and not accelerate violence in the state.

Tambuwal explained that during his tenure, he has been able to tame area boys with a view to promoting sanity in the polity.