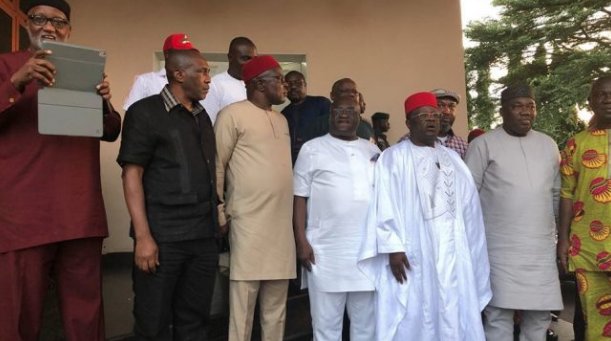 It seems the crisis involving the decision to consult South East Leaders over the Choice of Peter Obi as the Vice Presidential Candidate with Alhaji Atiku Abubakar takes a new dimension as aggrieved parties are beginning to speak up about their concerns over the decision to select the two time governor of Anambra state and business man.

A PDP chieftain told Sunday Sun Newspaper that Atiku had earlier promised to use the former Governor of the Central Bank of Nigeria (CBN), Prof. Charles Soludo as his running mate.

The chieftain who is also a Senatorial candidate in Anambra State said that the Southeast governors and some PDP leaders from the zone were working on endorsing President Muhammadu Buhari, since according to him, Atiku has shown that they do not matter in his political calculations.

“There will be peace if Soludo is made the running mate because that was what we agreed,” he said.

Asked if they still would have protested if former Minister of Finance and Coordinating Minister of the Economy, Dr Ngozi Okonjo-Iweala, was chosen by Atiku he said: “There is no problem with her, but Soludo is better. You know the woman is difficult, when you go to her for anything she will accuse you of wanting to be given the resources of the country.

“There was a meeting in Enugu over this. Three governors came – Abia, Enugu and Ebonyi. Ebonyi Governor (Dave Umahi) is the Chairman of South East Governors’ Forum, he is angry over what happened.”

Governor Umahi had last Friday issued a statement dissociates himself from a release by his Chief Press Secretary, where the choice of Obi was hailed.

He said that the governors and leaders of the zone were not consulted before Atiku settled for Obi.

He explained that yesterday’s meeting by the governors and leaders of the party was to agree that Obi and his people would not have their way.

He disclosed that he had met with Atiku and his wife and told them that Obi’s choice cannot sell in Igbo land.

His words: “I met with Atiku’s wife on this, she said that I am a businessman, that the business environment will be made good, that Atiku will make things good. That is no promise.”

On where Governor Willie Obiano stood on the matter, he said: “How are you asking this type of question? Obiano totally rejects Obi. Obi has lost four governors from Southeast. APC already has Imo, so the entire five Southeast states are in the hands of APC. The zone is for Buhari.”

Asked if Governor Umahi was serious on his threats, he said, “very serious. He is ready to work for Buhari.”

Narrating to Sun Newspaper how they came about Soludo, the PDP henchman claimed that he and some leaders of the party held a meeting three months ago where Atiku promised him to pick his vice presidential candidate from the Southeast.

“He told us that the person he had in mind was Soludo and Anambra governor also supported it.

“I was instrumental to him winning the nomination. We started this spin doctor job months ago. Atiku met with me several times alongside Gbenga Daniel. He came to my house many times.

“After he was nominated, he went back on his promise, he changed completely and now brought Peter Obi instead of Soludo that we agreed upon. This is why all the Southeast governors and PDP leaders are kicking. Everybody is mad at Atiku for that singular decision.

“I heard Atiku said he did not consult us because PDP governors from Southeast voted for Tambuwal, that they did not vote for him.

“He said that Wike agreed that Peter Obi should be his running mate. But in doing that, he jettisoned the promised he made to us that we will choose the person that will take the slot.

Apart from other reasons they adduced for opposing the choice of former Anambra governor, he contended that “Peter Obi is not a liberal politician, he is a conservative. His candidacy will not sell. Many of us who know him very well know that he is unreliable, tricky and selfish. He says one thing and does another. There is a problem in the PDP house and if it is not handled well it will jeopardize Atiku’s ambition.

“I will soon come out to say all that I am telling you publicly. I feel cheated by Atiku. I have complained to friends. Atiku’s wife has begged me, but I refused to accept her pleas.

“I have resolved to work for Buhari and I know that several other people are doing same.”

Read About The Heroic Welcome Of Tambuwal In Sokoto, Stray Bullets And Threats To Expose Wamako