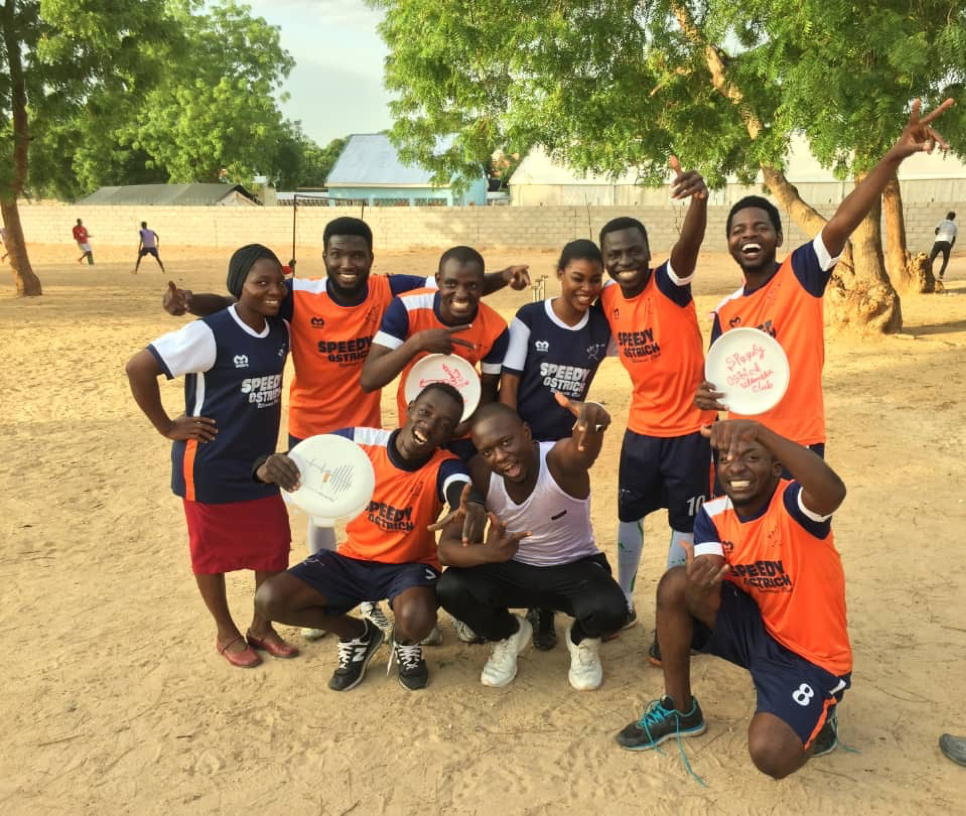 What began as a casual after office hours disc throwing exercise has become a sport that is changing the heart of Nigeria’s most toughest and dangerous state, Maiduguri. Ultimate is now a local contributor to fairness, positive attitude, self-control and good communication.

I used to really like playing football. But for me, Ultimate was love at first flight. -Babawo

Babawo 25 started the first Ultimate Club in Nigeria. The game found its way into Nigeria’s northeast city of Maiduguri, when a Flying Rabbits’ frisbee owned by Dr. Fanny Bastogne, landed in a Médecins Sans Frontières (Doctors Without Borders) malnutrition project.Initially, it began with two people throwing the Frisbee, before long Doctors, Drivers, Pharmacists, Security personnels, Nurses and local community members joined in the game, all playing within a small compound. On March 19, Babawo fascinated and passionate by the game, aspired to start an Ultimate Club

I liked it so much because it is injury free, and has no contact, so I invited seven of my friends to play with me, and gradually we started increasing in number.

For residents of Maiduguri, the game is a new positive deviance from all the surrounding fears and challenges they face. Babawo, like many other new adherents are drawn by the ‘Spirit of the Game’.

It was my first time knowing and playing the game, but everyone who has played with us has really appreciated the game and are motivated. Ultimate has taught me to be more friendly, sincere, and more conscious of others.

The Ultimate Club named Speedy Ostrich now has its colors, anthem, slogan, jerseys, and playing fields. But what has become more inspiring about the game is that it also encourages fairness (as it’s a game played without referee), and gender equity. Women and men play together, promoting a spirit of peace and togetherness in a city currently ridden by bombs and bullets.

In my heart, I really want people to know that Maiduguri is not just about conflict, but also about Love and happy people.

The Speedy Ostrich Ultimate Club has played several games in different fields in Maiduguri. Babawo who learned how to play from Dr. Fanny has been learning and sharing the rules and tricks of the game to new members, who then teach it to others.

Maiduguri is the capital of Borno state, a state in Nigeria which has been under the attack of the insurgency group Boko Haram. Prolonged conflict for over ten years has resulted in famine, poverty and disease outbreaks. But amidst all these challenges, the Speedy Ostrich players are transmitting the joy and spirit of the game, such as respect, fair-mindedness, positive attitude. The teams “Small wings, fly high” , the slogan of the Speedy Ostrich is the mirror of who they are: starting with so little means, but with so much motivation that they will fly higher than their perilous situation.