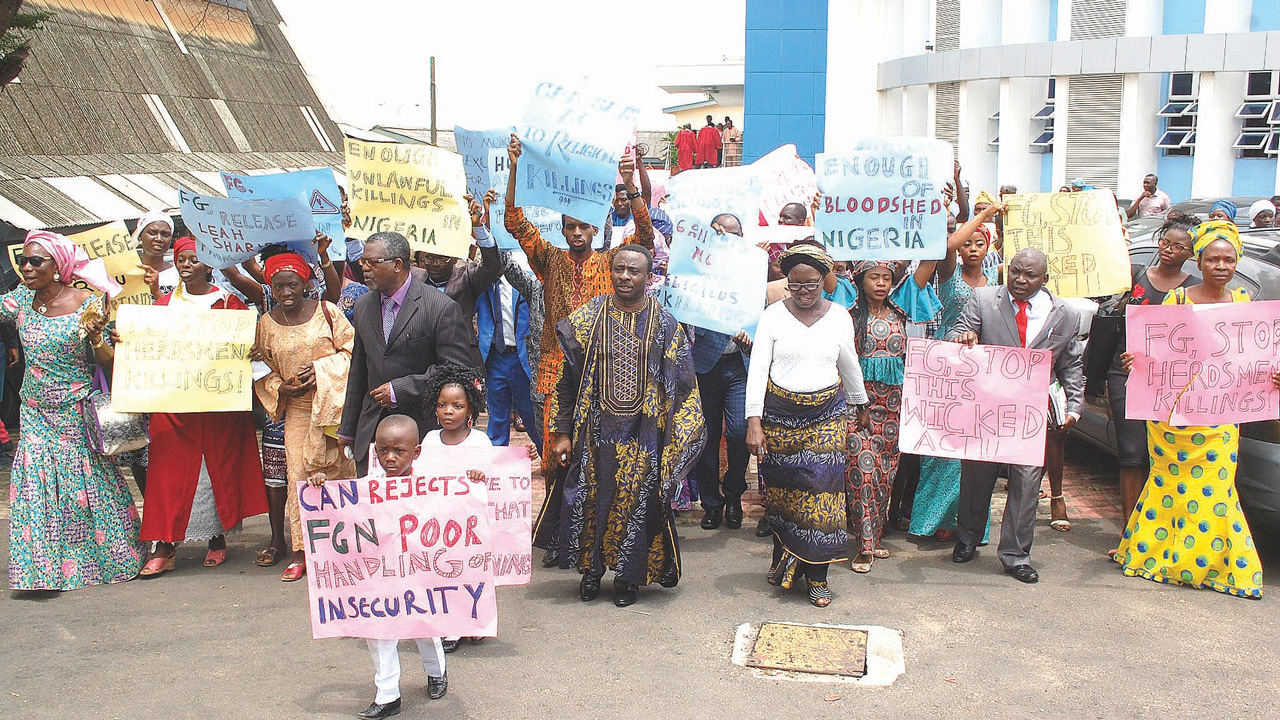 Christians across the country yesterday protested against the killings of their fellow believers and other innocent citizens in Benue State.

Following the killing of two Catholic priests and 17 other worshippers in a church in Benue last week, the Christian Association (CAN), directed all Christians in the country to protest peacefully on their church premises, demanding an end to the callous disregard for human life.

In compliance with the directive, the Christians in Ibadan, Oyo State yesterday staged a peace protest to condemn the Benue killings and passed a vote of no confidence in the service chiefs. They called on President Muhammadu Buhari to sack them and restructure the nation’s security apparatus.

The protesters who also blamed President Buhari for what they described as poor handling of security in the country and excesses of Fulani herdsmen, threatened to campaign against him if the killings of Christians continue.

CAN President, Dr. Supo Ayokunle, who worshipped at the Oritamefa Baptist Church, Ibadan led the church leaders, women groups, youth groups, children, choristers and others to carry out the protest within the premises.

Ayokunle said the people had lost faith in the security operatives in the country, and as such should be sacked and replaced with people with fresh ideas. According to him, the current government is at the risk of losing the 2019 general election if it would not guarantee the security of the citizens.

Inscriptions on some of the placards carried by the protesters read: “CAN says No to Violent Killings”, “FG, stop this wicked act”, “CAN says No to Religious Killings”, “FG, release Leah Sharibu from Captivity”, “Enough of Bloodshed in Nigeria, CAN rejects FGN poor handling of insecurity”, “Human beings are more valuable than cattle, protect human beings”, “FG be sensitive to families that are mourning”, “No more excuses for mass murder” and

“Enough of unlawful killings in the country.”

In Osogbo, Osun State, the Christians gathered at the popular Olaiya Junction, to register their anger.

Pastor Femi Abiola of the Calvary Baptist Church, Osogbo who led the protest said the action was necessary to draw global attention to the challenges Nigerian Christians are going through at the hands of insurgents and herdsmen.

Abiola who lamented the seemingly perpetual killings of innocent Christians and kidnapping of their children in some parts of the country said that the Federal Government should be more alert to its responsibilities.

“We are all aware of what happened in recent times in Benue State where some people were worshipping their God and two priests were murdered by some fundamentalists, probably in the name of religion.

“We are also aware of the kidnapping of innocent children, our daughters and when others were released, one was never released because she refused to deny her faith. There are cases of killings here and there, innocent Christians have been massacred now and then. There should be a stop to these killings and irresponsible act on the part of some people,” Abiola said.

Members of the First Baptist Church in Kaduna staged a peaceful protest within their premises. They carried placards with various inscriptions such as “Enough is enough”, “We demand immediate release of Leah Sharibu”, “Enough of unlawful killings in Nigeria.”

The leader of the church, Reverend Banjo Ajao said the protest became necessary to draw the attention of policymakers to the unnecessary killings and abductions ravaging the country in recent times.

“We are doing this in compliance with the directive from CAN. The government must go beyond the issuance of condemnation statements and do its primary responsibility of protecting life and property. It is what they swore to do while taking over the mantle of leadership.”

The protest was also observed in Kogi State yesterday. The CAN members displayed placards to express their displeasure with the ongoing killings across the country.

The state chairman of the association, Bishop John Ibenu, told newsmen after the protest in his church in Lokoja that there was the need for the Federal Government to set up a truth and reconciliation commission over herdsmen attacks.

Ibenu said: “It is a national day of prayer and protest, Christians don’t protest, if we have to, that means the issues have reached the peak. We spend time to pray for the nation and Kogi State and also for the future. Kogi CAN is obeying the directive of the national CAN to protest peacefully on our church premises.

“The killings have continued unabated and they been taken to the church. There were no grasses for cattle to eat in the church when the Fulani invaded it and killed worshippers, so what has started on the farm came to the village and has entered the church.

“Government must act to make sure that this is not something aimed at the church. We are being proactive by calling for attention before it degenerates, we do not want to be pushed to a point where we will start using the pulpits to tell everyone to look for available arm to defend themselves.”

Most churches in Benue State observed the protest on their premises. When The Guardian went round some of these churches in Makurdi, the state capital, worshippers in all the denominations were seen wearing black attire, signifying mourning mood.

At the Holy Ghost Catholic Church, Wadata, close to the Federal Medical Centre, most of the parishioners, especially women, did not wear necklaces, earrings and shoes as a sign of grief over the killings.

One of the parishioners, Mrs. Mbafan Atser, said with disgust that President Muhammadu had failed Nigerians, particularly Benue people that voted for him massively.

“I Worry About the Capacity of Post-Jega INEC” – U.S. Intelligence Expert On Nigeria, Matthew Page