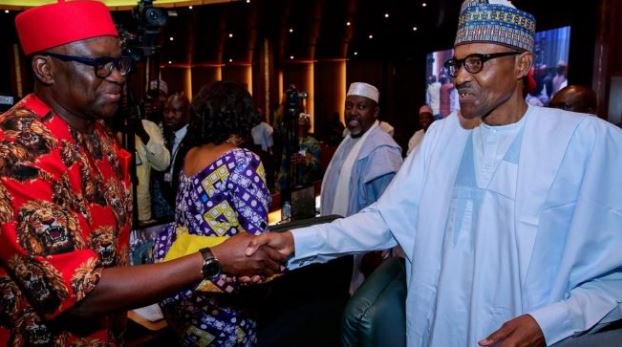 Ayo Fayose, Ekiti state governor, has yet again called on President Muhammadu Buhari to step aside.

The governor said the insecurity and economic problems in the country were indications that the president lacks the know-how to be at the helm of the affairs.

In a statement issued by Lere Olayinka, his spokesman, the governor said the abduction of 105 pupils of Government Girls Technical College, Dapchi, Yobe state and Nigeria’s regression in Transparency International’s perception of corruption report were further proof that the president needs to “take a bow”.

He said: “President Buhari promised Nigerians that he will bring back the missing Chibok Girls and defeat Boko Haram within three months. After more than 32 months in office, Boko Haram is still killing Nigerians, with herdsmen also on killing spree.

“Painfully, the same Boko Haram they claimed to have defeated suddenly became strong enough to kidnap over 100 students. Now, Nigeria is not only looking for the remaining Chibok Girls, another over 100 innocent students have joined, this is unacceptable.

“Funny enough, a few days ago, the President called on all Nigerians to be prepared to pay the ‘ultimate price’ for the progress and unity of the nation and I wish to ask him what other price he wants Nigerians to pay.

“Already, Nigerians are sacrificing their lives by getting killed while seeking what to eat. Some have even committed suicide. Yet, the same President who is enjoying all the benefits of his office is calling on Nigerians to forego personal pleasures and pay the ultimate price.

Fayose further said the president has nothing to campaign with ahead of the 2019 elections.

“Is President Buhari going to justify that within 30 months, Nigeria’s debt that was N12.06 trillion in 2015 increased by over N10 trillion?

“Fact is that Nigeria is under a rudderless federal government. Everything is now upside down, with everywhere in the country becoming insecure. What Nigerians expect in a situation like this is a clean break from this calamitous government and new breath of life, not continuation of a government lacking a direction.”

‘We Can’t Wait For Men To Give Us Power,’ – Senator Stella Oduah Charges Women On International Women’s Day 2018