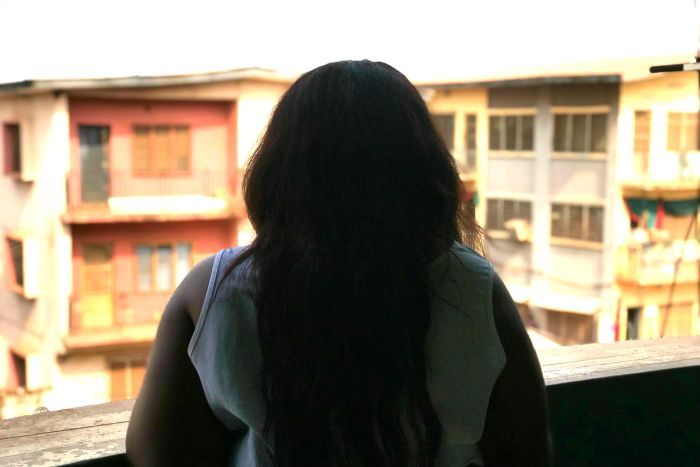 Blessing grew up in a dusty but bustling city in Nigeria’s forgotten east, but while she was at school and in love with her boyfriend, she fell pregnant.

Somehow Blessing’s mother, and the rest of her neighbourhood, found out she was pregnant and tried to insist she marry her boyfriend and keep the baby.

“Knowing full well I couldn’t keep the child I took the risk myself to have an abortion on my own,” she says.

“It’s so painful that your loved ones reject you when you need them most in your life.

After talking to school friends, Blessing’s made an appointment with a “native” (traditional) doctor who prescribed her a poisonous cocktail of spirits, pepper, bark and herbs to “force the child out”.

“After taking it the first day it was like my spirit was dead and that’s when I made the decision to go to the quack,” she says.

Blessing used the money her mother gave her to buy school supplies (about $40) to procure an abortion from a backyard abortionist.

“All I know is I was lying down and he brought something metal and I opened my legs,” she says. “I was screaming.”

But after she returned home, Blessing started bleeding heavily. Her sister found her writhing silently in pain on the floor. She was rushed to hospital where it was discovered she’d had an abortion.

“The very day I was discharged my family paid the bill and left me. Coming back home people were looking at me, saying ‘this one go kill herself’,” Blessing says.

‘Quacks are killing our women’

Blessing’s story is not uncommon: a study found that 1.25 million abortions occurred in Nigeria in 2012 alone, a figure that sexual health advocate Hauwa Shekarau says is “just the tip of the iceberg”.

With limited access to contraception, abortion rates are sky-high in conservative Nigeria. But the country’s restrictive laws, which only permit abortion if a mother’s life is in danger, mean most are conducted by backyard abortionists.

“The law doesn’t stop abortions”, says Ms Shekarau, director of International Pregnancy Advisory Services in Nigeria. Rather, the ban is “responsible for creating an environment for quacks to thrive. Quacks who are killing our women.”

Figures vary but it’s thought anywhere from 34,000 to 50,000 women die from unsafe abortions in Nigeria every year. For those who survive, 40 per cent experience complications which can be life-long.

From quack to brothel

When Blessing was a teenager, she had hoped to study a communications degree at university.

But her abortion, which left her cut off from her family and community, was a one-way ticket to Nigeria’s dangerous, and often deadly, sex industry.

But not long afterwards, desperate and homeless, Blessing walked into a brothel to apply for a job as its receptionist.

She didn’t get the job but a sex worker invited her to stay the night and the following day she was having sex with men for less than $2.

Blessing says many sex workers who can’t access abortions end up living in brothels with their children, who lie under the bed while their mothers sleep with clients. “If you see the children you will cry,” she says.

Despite the hardship she’s experienced, Blessing is optimistic.

“It’s been rough but now I’m proud of who I am and my life is good because I make decisions for myself without looking back,” she says.

Nigeria’s abortion laws date back to 1861 and stem from its colonial administrator, the British Empire. Penalties include 14 years jail for anyone who provides abortions and seven years if it’s self-inflicted.

Nigerians are the second-most religious people in the world and Ms Shekarau says this zealousness impedes any relaxation of the laws, despite concerted efforts by medical and social groups since the ’70s.

In 2013 amid backlash from religious groups, the Governor of Imo state in eastern Nigeria repealed a law he passed allowing for abortions in the case of rape and incest.

Chi-Chi, a Port Harcourt sex worker who had an abortion at 19, says it would take “God’s intervention” to change most Nigerians’ attitudes.

She says the stigma of abortion and pregnancies out of wedlock was bringing a lot of poor girls like her into sex work.

Chi-Chi obtained a safe abortion by using a fake doctor’s referral written up by her boyfriend, which said her life was at risk. Her procedure took place in a hospital with a qualified doctor — she considers herself lucky:

‘Hell would have been better’

Although Chi-Chi’s procedure went smoothly, a nurse told her mother and others in her community. At the time, Chi-Chi was waiting to be admitted to university.

“Society sees it as if I condemned myself as a woman. To them I didn’t go to have an abortion, I went to remove my womb,” the 24-year old says.

“I was an evil person who had committed murder”.

After the news broke, Chi-Chi says her mother was forced to take a seat in the back row at her church for three months.

She was woken at night be her mother’s wailing prayers — “this girl you give me God … it’s not my fault. The murder she has committed is on her head” — and other taunts that had Chi-Chi contemplating suicide.

NGOs pick up the slack

Local NGOs have stepped in to attempt to save women’s lives by boosting post-abortion care and contraception rates, which are as low as 15 per cent.

“If we increase the prevalence of contraceptives then we can reduce unsafe abortions.”

The doctor says he deals with about 25 women who’ve had botched abortions every month.

The most common injuries he sees are haemorrhaging, lacerations, permanent damage to reproductive organs, infections and poisoning from “anti-abortion” cocktails or pills.

He says the issue “cuts across all walks of life” but affects the poor disproportionately, especially when it comes to access to contraception and specialised care.

Ms Shekarau’s organisation has been working closely with the federal ministry of health to produce a post-abortion care manual for Nigerian health providers and hospitals.

“Nigeria is acting after the fact,” she says. “When a woman starts bleeding then she runs to the hospital for help and we train health providers to attend to such women.”

While broad change is unlikely to be forthcoming, Ms Shekarau doesn’t believe, like Chi-Chi, that it’ll take divine intervention:

“With time and the right leadership abortion will be legal because society is dynamic,” she says.

“In the past it was never discussed in the open but today the public domain is awash with people talking about abortion. It’s only a matter of time.”

“One After The Other, He Forcefully Slept With Them” – In Kano, Teacher Arraigned For Defiling Male Students