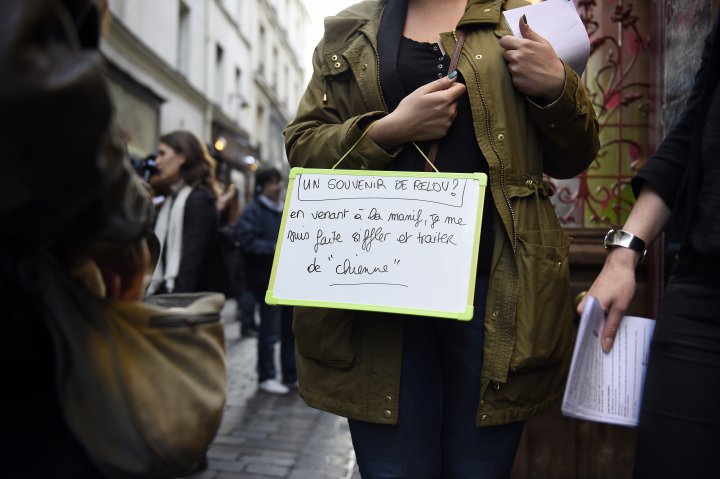 The initiative, launched by a French journalist who lives in New York, follows the #MeToo campaign, where tens of thousands of women have taken to Twitter and Facebook to recount experiences of being verbally abused, groped, molested and raped by bosses, teachers and family.

The French women have gone further, with some naming names rather than just sharing their experience of abuse or discrimination.

Among the posts were allegations of sexual abuse, rape threats, and of filming up women’s skirts.

“A photographer told me ‘we could do the photos, or we could just have sex,'” wrote one woman who called herself Audrey Merveille.

“One bouncer rescued me from a guy in a nightclub, only to then say he deserved a kiss for his trouble,” said another, who called herself Nathalie Marchak.

French minister of gender equality Marlène Schiappa applauded the initiative, saying: “Twitter cannot replace legal action but it is a first step for many women.”

“Anything that allows women to talk is a good method. I understand that being behind a screen can make it easier to put extremely difficult issues into words,” she told the Thomson Reuters Foundation in an email.

The social media campaigns were sparked by public outcry over allegations that movie producer Harvey Weinstein sexually harassed or assaulted a number of women over three decades in the film business.

Earlier this week, Schiappa announced plans for a new law against sexual harassment and violence that would fine men for wolf-whistling and lecherous behavior, among other measures.

She said her ministry would embark on a “Tour de France” to consult citizens on proposed provisions to the law.

For some women, #BalanceTonPorc is long overdue.

“I’ve lived in Paris for five years and already been physically assaulted twice, and I’ve lost count of the number of insults and marriage proposals,” entrepreneur and prominent feminist Marie Beauchesne told the Thomson Reuters Foundation.

Others, however, have criticised the campaign, which is trending on Twitter in France, denouncing it on social media as focused on revenge and public shaming rather than on legislative progress.

“Does it contribute anything? Will it solve the problem?”

To Increase Freedom, All States With Blasphemy Laws Should Repeal Them – UN Human Rights Expert Says