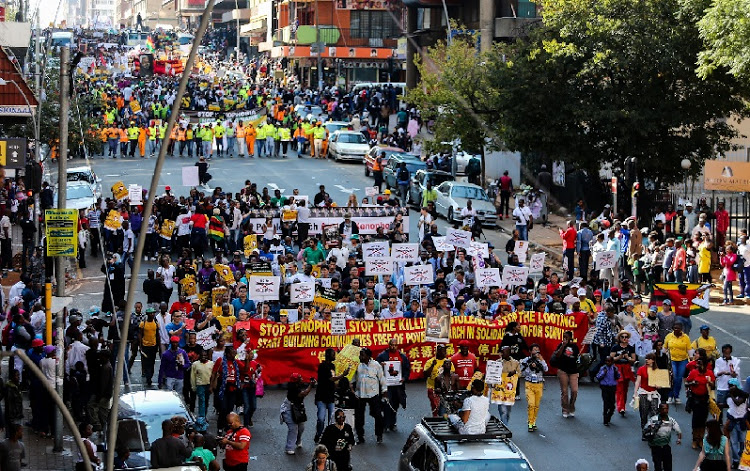 Permission should not have been given for the anti-illegal immigrant protest in Tshwane, which turned violent on Friday morning, the Institute for Security Studies (ISS) said.

“We know from past experience what the risks are and how difficult it is to control these groups once they become incited and excited,” ISS senior researcher for crime and justice Johan Burger said.

He said despite police intelligence, the information, that was circulating on social media should have been a clear indication that the march could turn violent.

Groups calling themselves “concerned residents” from townships around Pretoria started marching to the central business district (CBD) to hand over a memorandum to the Department of Home Affairs.

Mob singing in Pretoria today: “Foreigners must go. We will kill them.”

A low-flying police helicopter has also been deployed amid a stand-off between local protesters and foreigners, with both groups reportedly armed with sticks, bricks and knives.President Jacob Zuma had earlier called for calm ahead of the anti-immigrant march.Many unemployed South Africans accuse foreigners of taking their jobs.Mr Zuma has condemned the acts of violence and intimidation directed at African immigrants living in South Africa.Earlier this week, angry mobs attacked Nigerians and looted shops belonging to Somalis, Pakistani and other migrants in townships around Pretoria and parts of Johannesburg.He said many foreign citizens living in South Africa were law-abiding and contributed to the economy.“It is wrong to brandish all non-nationals as drug dealers or human traffickers. Let us isolate those who commit such crimes and work with government to have them arrested, without stereotyping and causing harm to innocent people,” the president said in a statement.He said he would be championing the fight against crime to promote safer and more stable communities.The home affairs minister announced plans on Thursday to inspect workplaces to see if firms are employing undocumented foreigners.

The main group behind the protests, Mamelodi Concerned Residents, has blamed foreign nationals for taking jobs and accused them of being involved in prostitution rings and drug cartels, accusations denied by immigrant communities.
South Africa experienced its worst outbreak of violence against foreigners in 2008, when more than 60 people died.
Two years ago, similar xenophobic unrest in the cities of Johannesburg and Durban claimed seven lives as African immigrants were hunted down and attacked by gangs.