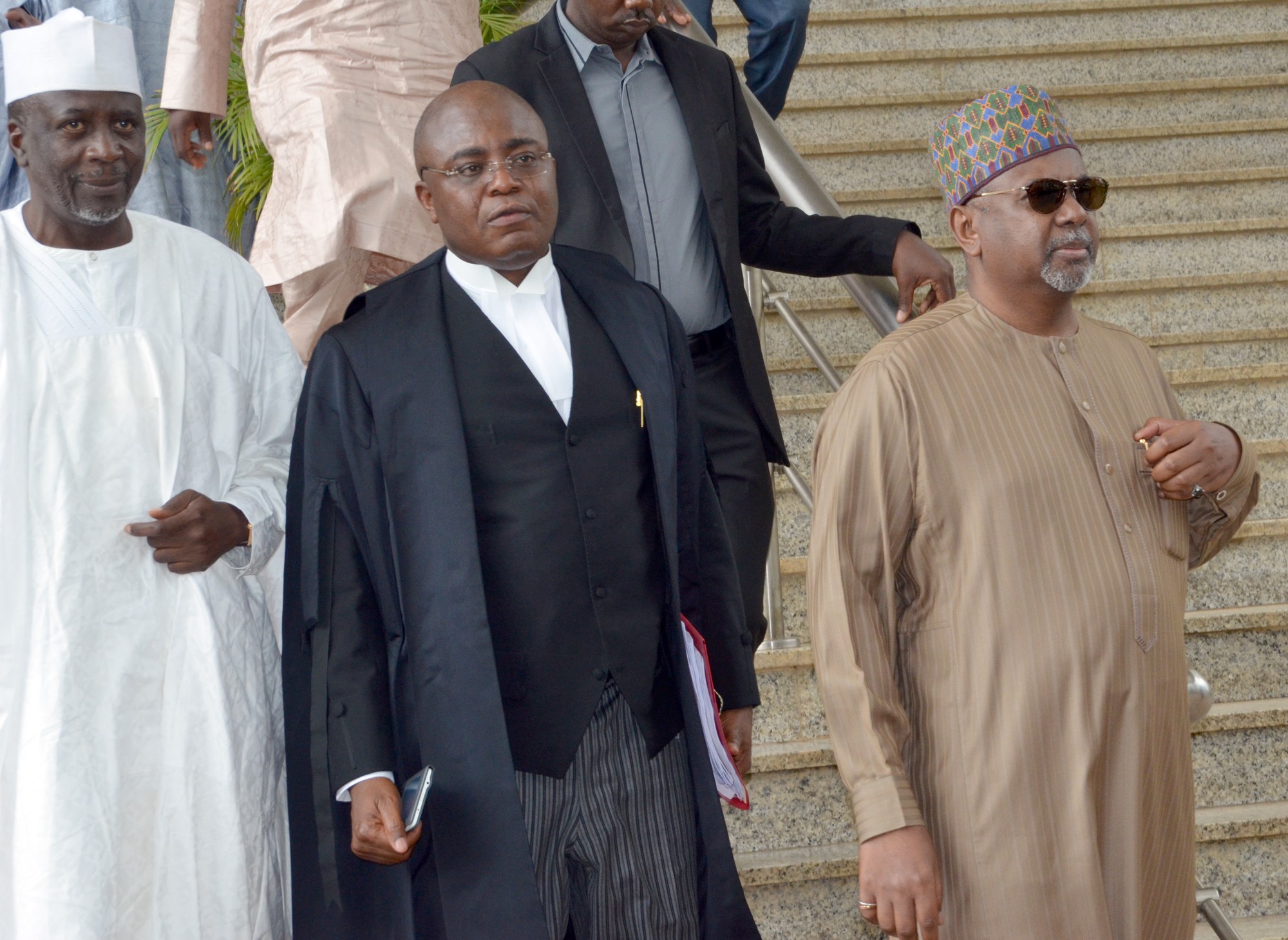 Dasuki Asks Court to Consolidate Charges
…  Insists on due process in trial
Former National Security Adviser (NSA) Colonel Mohammed, Sambo Dasuki (rtd) has alleged before an Abuja High Court that the federal government planned to ambush him with double jeopardy in the two criminal charges brought against him at the Federal Capital Territory high court in Abuja and pleaded that the two charges be consolidated in the interest of justice, fair play and due process.
Dasuki who has been illegally detained after being granted multiple bails by courts,  said that the federal government in the quest to nail him has engaged in gross abuse of court and legal process by instituting various criminal charges against him on just one issue of the office of the National Security Adviser.
In a fresh motion he filed to challenge the alleged abuse of court process by government, Dasuki said that it was wrong in law and even against natural justice for the government to prosecute him on two different charges on the same alleged arms fund diversion.
In the motion filed by his lead counsel, Mr. Joseph Daudu SAN, the ex NSA insisted that the two charges be consolidated by the authorities of the court in the interest of justice in order to rescue him from double jeopardy planned for him by government.
The motion on notice was brought pursuant to sections 6(6)(a); 36(5) & (9) of the 1999 constitution (as amended); section 1(1); 208;396 (3); 491 & 492(3) of the Administration of Criminal Justice Act, 2015; section 25 of the Interpretation Act
Dasuki sought an order of the court consolidating charge no. FCT/HC/CR 2015 between FRN VS COL. Sambo Dasuki (rtd) & 4 others with charge No. FCT/HC/CR/2015 between FRN VS Bashir Yuguda, Col. Mhammed Sabo Dasuki & 4 others.
The ex NSA also applied for an order compelling the Federal Government to amend charge No. FCT/HC/CR 2015 between FRN VS COL. Sambo Dasuki (rtd) & 4 others with charge No. FCT/HC/CR/2015 between FRN VS Bashir Yuguda, Col. Mhammed Sabo Dasuki & 4 others in line with his request for consolidation
He also demanded for another order declaring that the simultaneous prosecution of the two charges against him from one issue is unconstitutional and prejudicial to his right to fair trial and is consequently and abuse of court process.
In a 28 paragraph affidavit in support of the motion deposed to by one Dolapo Kehinde, it was stated that Dasuki is standing trial on two different charges from the same issue of alleged diversion of N51.7B and breach of public trust when he was the NSA.
The deponent claimed that Dasuki will be put to great disadvantage because the trial is constitutionally unfair to subject any person to more than one trial on the same subject matter and that the defendant stand the risk of double jeopardy with trial on two sets of charges which bother on the same set of facts.
It was also claimed that trial on two sets of charges from one issue will bring hardships to the court and Dasuki if the 15 witnesses testify in two different proceedings over the same issue and the same transaction.
The affidavit further claimed that the prosecution will not be prejudiced if the two charges are consolidated but will serve the interest of justice and the effective administration of criminal Justice.
In the alternative, Dasuki prayed that his name be struck out from one of the two charges in the interest of justice.
The others parties in the matter are former Director of Finance and Administration, Office of the National Security Adviser (ONSA), Shuaibu Salisu;  former General Manager, Nigerian National Petroleum Corporation (NNPC),  Aminu Babakusa and two firms: Acacia Holdings Limited and Reliance Referral Hospital Limited.
When the matter came up yesterday, Counsel to Dasuki Mr. Ahmed Raji SAN announced that he has a pending motion seeking consolidation of the two charges against his client but the prosecution counsel Mr. Rotimi Jacobs SAN complained that the new motion was to frustrate and delay the trial and urged the court not to entertain demotion.
However, Justice Baba Yusuf said that since the motion has been filed and served it will not serve any purpose for the court to close its eyes on it.
He then adjourned hearing of the motion till March 2, 2017
……………………………………………………………………………………………………………………………………
Court Orders Forfeiture of 17 Vehicles of Ex-Customs Boss to FG
Justice S.M Shuaibu of the Federal High Court sitting in Kaduna today February 24, 2017 gave an interim order, forfeiting the seventeen vehicles found in the warehouse of former Comptroller General of Customs,  Abdullahi Dikko Inde, to the Federal Government.
The order was sequel to an ex parte application by the Economic and Financial Crimes Commission seeking among others, the forfeiture of the vehicles to the Nigerian Government, pending the conclusion of investigation and determination of the case.
In his ruling, Justice Shuaibu held that  “the seventeen (17) vehicles which are now in the custody of the applicant ( EFCC) and as properly described and listed in the schedule marked exhibit EFCC 2 attached to the affidavit in support of the application are hereby forfeited to the Federal Government of Nigeria in the interim pending conclusion of the investigation.”
Operatives of the Commission had on February 20 stormed the warehouse of the former Customs boss on Nnamdi Azikwe Street, Kaduna and discovered seventeen exotic vehicles worth Hundreds of millions of Naira, suspected to be proceeds of crime.
Wilson Uwujaren
Head Media & Publicity
24 February, 2017
Related Topics:EFCCSambo DasukiCourtNational Security Adviser
Up Next