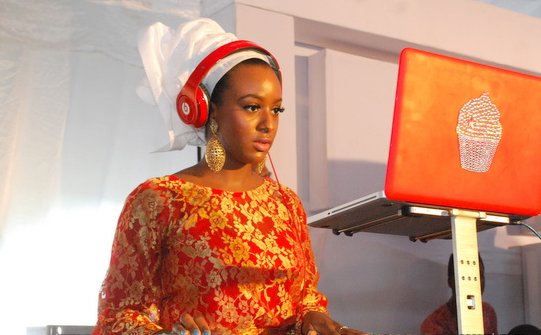 Florence ‘DJ Cuppy’ Otedola, an England-based Nigerian disc jockey, says she has been in several situations where her talent wasn’t valued.

The daughter of billionaire businessman Femi Otedola admits that her father’s influence opened doors for her, yet maintains that “skill, quality and talent” are what have brought her this far.

While speaking on Rubbin Minds, a programme on Channels TV, Florence noted that there are good and bad sides to the effect of her father’s name.

“People don’t realise how I hard I work. Sometimes, doors are open but only skill, quality and talent can keep you in those doors. I won’t have come this far If I’m not good at what I do.

“There are bad sides to it. Honestly, a lot of people don’t value my talent. I struggle with it,” said the disc-jockey who owns Red Velvet Music Group

When asked by the presenter, Ebuka Obi-Uchendu, why she prefers to reside in England, DJ Cuppy said: “I feel like we need more Nigerian, African talents representing us outside the country. We are the coolest country in the world but we have to look beyond the border sometimes.

“People are obsessed with African talent at this point in time. I am in the right place at the right time,” she added.

DJ Cuppy has been romantically linked with music manager Asa Asika and their relationship status was recently dredged up due to his feature in her reality TV show, ‘Cuppy takes Africa’.

Expectedly, she was asked the question and she said: “We actually dated, we dated. We were really good friends. When you grow up with someone and they are in the same industry with you, you kind of spend much time together.”

The 25-year-old entertainer who’s in a relationship with Sunderland striker, Victor Anichebe, lamented the fact that she doesn’t get to spend as much time as she would want with him

“He’s very busy. It’s sad, we don’t get to spend Christmas together,” she moaned.

“We have been dating for well over a year. It’s so refreshing to be with someone open-minded and hardworking” DJ Cuppy added while revealing that she was set up with Victor Anichebe by a stylist who works with both of them.

She also hinted that the relationship is pregnant with possibilities, revealing that “the intention” is to go the long haul.

“That’s the intention. Definitely. There’s no point doing something if you’re not going to have passion. I’m really, really happy,” she blurted.

Having been disc-jockeying since the age of 16, she revealed that she dabbled into singing and even rapping in her early days.

“I used to write songs. I started off as a producer, I even rapped. It just didn’t work. We can’t all be good at everything so I decided to just face front.”

“I Have A Confession, I Am Addicted To Money,” – Tiwa Savage