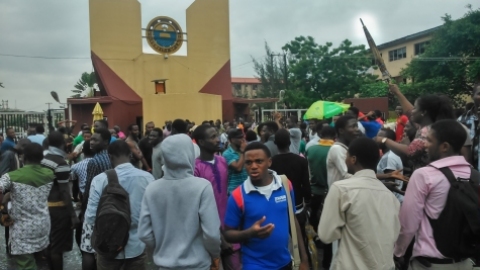 The national body of the union on Tuesday directed members across the country to proceed on a warning strike with effect from Wednesday to press home their demands.

The News Agency of Nigeria (NAN) visited the University, which is still in the middle of its second academic semester, and reports that there is a mass exodus of students from the campus.

NAN observed that lecture halls and theatres in the university were devoid of the usual hustle and bustle in compliance with the ASUU directive.

NAN also reports that the students of the institution have less than two weeks to write their second semester examination.

Some of the students who spoke to NAN insisted that staying back on campus would amount to a waste of resource, adding that if the strike continued, it would be a great setback for them.

Speaking to newsmen about the strike, ASUU Chairman KUST branch, Dr AbdulKadir Muhammad said it was a result of the Federal Government’s failure to fulfil its end of the 2013 agreement.

Muhammad said that part of an agreement reached with the government in 2013 was a release of N200 billion yearly intervention to universities.

At the University of Lagos, (UNILAG) and Lagos State University, (LASU), there were full compliance on the directives from ASUU, as lecturers in both institutions boycotted lectures.

Visits to campuses at Akoka and Ojo revealed that both lecturers and students were not in the classes, and many students seized the opportunity of the strike to travel home.

Academic activities in Imo State University, IMSU, and Federal University of Technology, FUTO, all in Owerri, have been grounded as the popular lecture theatres were empty. All the students who spoke to newsmen in the respective institutions, appealed to government to dialogue with ASUU and resolve the problems amicably.

“I am honestly sick and tired of the periodic breaks in my school’s academic calendar. Government should please dialogue with ASUU and save us from this nagging problem,” a female Sociology student lamented.