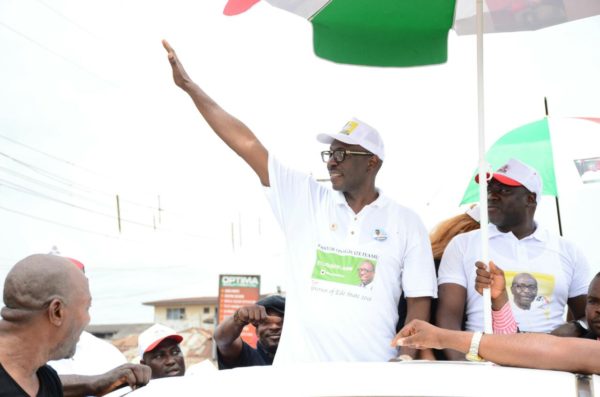 As Mr. Godwin Obaseki of the All Progressives Congress (APC) was being sworn in as the governor of Edo state, Peoples Democratic Party (PDP) candidate in the September 28 2016 Edo state governorship election, Pastor Osagie Ize-Iyamu, Saturday appealed to all his supporters to remain calm, non-violent, hopeful and prayerful as he believes that he would reclaim his mandate as the duly elected governor of the state through the judiciary.

Ize-Iyamu spoke in Benin at the unveiling of the office of the Edo Mandate Recovery Centre under the aegis of coalition of civil society groups, students, activists, voters, traders, market women, politicians and stakeholders.

He said he was committed to the actualization of the mandate freely given to him by the good people of Edo state who turned out en masse on September 28 2016 to vote for him as the PDP candidate.

The PDP candidate who appreciated the mammoth crowd of supporters who turned up for the unveiling ceremony of the Edo Mandate Recovery Group appreciated all who have remained steadfast and committed to supporting him all this while.

He said, “Edo people should also have faith, and on no condition should they resort to violence. It is going to be a long road and in the course of this journey, a man who did not win will be temporarily sworn in; but we must not leave the State. The will of God will be done at the end of the day”.

On the need for the office, one those behind it, Mr. Daniel Ogbegie, said the Edo Mandate Recovery Group was set up not to serve as a rival group to the PDP as a Party but another platform to galvanise Edo people who would want to contribute their quota towards recovering Ize-Iyamu mandate.

He said, “We honestly believe that the movement to reclaim this mandate has gone beyond the PDP and Pastor Osagie Ize-Iyamu. It is a movement of all Edo people. A movement to protect the sanctity of our tomorrow, our collective destinies.

“So we as a group will serve as a veritable platform for the critical stakeholders in this mandate to synergize in ensuring resounding success in the aforementioned goals.

“As part of recovering this mandate, it is pertinent to also monitor the Government that is being inaugurated today at the Ogbemudia stadium; not to give them legitimacy (they are already heavily yoked with the burden of illegitimacy hanging on them like the sword of Damocles, while sweating profusely as a result), but to hold them to account to the people throughout the short period they will superintend over the affairs of the State.

“This we shall do on behalf of the people and the government that shall be installed in accordance with their will at the end of the constitutional process of mandate recovery that has already been embarked upon by the PDP at the Governorship Election Petition Tribunal.
“I assure Edo people that we have a good case at the tribunal and with your prayers and every support, we shall pursue, overcome and recover all”.

The high point of the unveiling of the office which featured the cutting of the tape by a Pentecostal Minister, Bishop Iyobosa Atoe, assisted by pioneer Secretary of the PDP, Deacon Bayo Ogbomo.

Speaker after the other thereafter including leaders of the group condemned the INEC results which gave electoral victory of the September 2016 to Mr Godwin Obaseki, the APC candidate who was sworn in yesterday at the Executive Governor of Edo state.

Also speaking Revd Olu Martins said Edo state has never had it so bad with a leader in the person of the former governor of the state, Mr Adams Oshiomhole, whose eight year tenure as governor amounted to summary failure of Goverannce.

Leader of the Talakawa Parliament, Mr Kola Edokpayi, said he is confident that once the Edo state governorship elections tribunal gets underway, it will speed up the process of restoring to Edo People the mandate which they gave to the PDP and Ize-Iyamu in September.