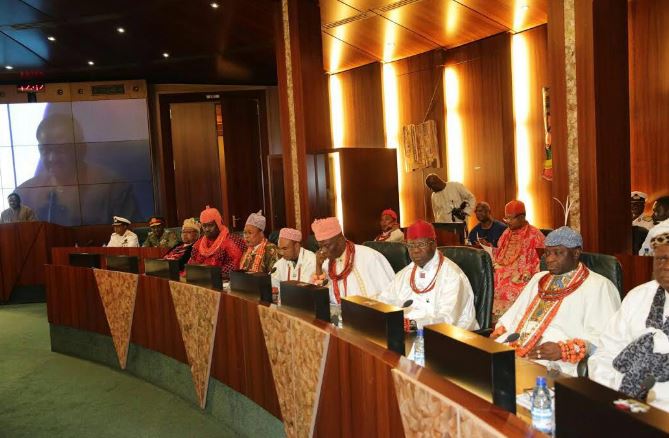 At last we can heave a sigh of relief as the Pan Niger Delta leaders’ forum has met with President Muhammadu Buhari and presented their 16-point demands for a comprehensive turnaround in the oil rich region. Firstly, we must acknowledge the jaw-jaw approach of Mr. President who opted to dialogue with the leaders of the region.

Definitely, this is a win-win for all stakeholders, and the country generally as it is in our enlightened interest to ensure that peace reigns in all parts of the country, and President Muhammadu Buhari has led the way. It now requires the support of all Nigerians, and particularly stakeholders in Niger Delta region to reciprocate the good gesture.

There is no gainsaying the fact that the incessant attacks on oil installations and pipelines have led to depletion in oil exports and the concomitant negative impact on Nigeria’s accruable revenue has left a sour taste in the mouth. The mere fact that the federal government extended the olive branch to the Niger Delta leaders as a way of finding lasting solutions to the problems afflicting the region is commendable and ought to be sustained.

It does not augur well for the country when some groups embark on destroying the mainstay of the nation’s economy. Apart from the negative consequences on the entire nation, oil spillages contaminate the environment, and this endangers the ecosystem. Furthermore, the uncontrolled oil spillages have the potential of exacerbating the harsh effects of climate change which is currently ravaging the entire globe.
With the recent parley between President Buhari and the Niger Delta leaders, it is obvious that he has demonstrated good faith and in keeping his promise to treat all Nigerians fairly.

Regardless of the grievances of any group, including the much touted neglect of the oil producing region, there is no justification to resort to violence. Let me support this position with the words of former British Prime Minister Winston Churchill who advised that “jaw-jaw is better than war-war”.

President Buhari demonstrated unparallel good faith by convening the meeting with the Niger Delta stakeholders and offering them an opportunity to table their demands.

After receiving their demands, he was unequivocal in harping on the need for peace as a prerequisite for development. In this regard, it is expected that the leaders from the region will reciprocate the President’s peace overtures by prevailing on their youths to give peace a chance by halting further pipeline attacks.

It must be noted that President Buhari has shown empathy and commitment towards the plight of the Niger Delta region. A few months ago, he rolled out a comprehensive plan for the clean-up of Ogoni land. Meanwhile the devastation of the Ogoni environment happened several decades ago and under the watch of past leaders.

Similarly, he has committed to fast track the completion of the East-West Road. Under his administration, the Lagos-Calabar coastal rail line has been budgeted for, and will be completed in record time. Even the amnesty programme has been rejuvenated with a sizeable number of repentant militants being trained in different institutions within and outside Nigeria.
Furthermore, the intervention agency for the region, Niger Delta Development Commission has been given necessary financial boost to deliver on their mandates. So in totality, it can be said that President Muhammadu Buhari is determined to develop the Niger Delta, and reclaim the oil-polluted environment for the benefit of the people.

Perhaps all interest groups in the region need to be reminded that it is a herculean task to restore an environment that has been neglected over the years in a hurry. Definitely it will require painstaking planning and diligent execution of remediation projects. Therefore, there is need for the stakeholders including oil bearing communities, traditional institutions, women and youths to partner with the President Muhammadu Buhari administration in finding a sustainable and holistic solution to the problems.

As much as we regret the neglect of the region by previous administrations, yet it is consoling that the present government has shown considerable interest in putting things right, and for this to be achieved all hands must be on deck. This can only happen under a peaceful atmosphere, and the key players in the region have a responsibility to support the federal government in delivering on the regions expectations.

As a President that caters for a population of over 170 million people across the thirty-six states and the FCT with the complexities of the country, he needs concentration of the mind as any distraction may derail his lofty plans for the country, and Niger Delta in particular.

While it is understandable that the region want a greater share in the resources exploited from the region, as encapsulated in their 16-point demands, yet there is need to be amenable and open to realistic and feasible solutions. In this regard President Muhammadu Buhari’s reputation for keeping faith in agreements easily comes to the fore, and will be a catalyst for the actualization of the objectives espoused at the parley with Niger Delta leaders.

The point must also be made that apart from the federal government, the states and local governments in the Niger Delta region have a pivotal role to play in seeing that issues of development are adequately addressed. A situation where they receive 13% derivation from the federation account with no tangible projects to show for it leaves much to be desired.

They ought to be partners in progress with the Federal Government in developing the region, rather than staying aloof and indifferent in the face of daunting developmental challenges.

Now that we have an administration committed to redressing the wrongs of the past mostly as they affect the Niger Delta region, let us fully utilize the opportunity by demonstrating equal goodwill. President Buhari means well for the Niger Delta but his efforts can only yield the desired results when those concerned cooperate with him.

This brings us to the issue of discordant tunes emanating from the Niger Delta region where other groups have raised more demands which seem to run contrary to what most Nigerians believed. For example, the oil bearing communities under the umbrella of HOSTCOM just recently released a 15 point demand and one begins to wonder why they failed to align their demands with those of the entire Niger Delta leaders. This inability to streamline their demands and hold a common position has the potential to undermine the sincere efforts of the federal government to address the Niger Delta question once and for all.
It must be borne in mind that irrespective of the Niger Delta concerns for the rapid development of the region, the federal government has to contend with other multifaceted issues across the country. For example the dilapidated infrastructure especially roads in the South East, desertification in the North and the problem of unemployment in the country. Luckily, President Muhammadu Buhari’s administration is focused on tackling the myriad of problems they met on assumption of office. With these efforts it is expected that in no distant time, Nigerians will begin to reap the benefits of the several initiatives being put in place by the present government, especially as they are encapsulated in the diversification policy.

Chukwudi Enekwechi, Journalist and Politician, writes from Abuja and can be reached via kwechis19@yahoo.com

Opinion: Kano Blasphemy Killing; Where Is Justice For Bridget Agbahime?