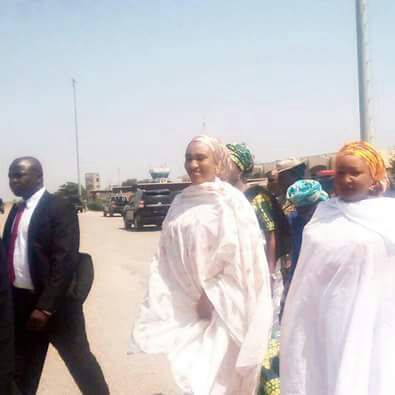 Wife of the President, Mrs Aisha Buhari has flagged off the distribution of foods and household utensils to returnees from Internally Displaced Persons (IDPs) Camps to fast track their resettlement in their communities.

Mrs Buhari who was accompanied by the wives of the Chief of Air Staff, that of former Inspector General of Police, Mrs Idris and former deputy governor of Plateau State, Mrs Pauline Tallen, said at Beneshiek, headquarters of Kaga Local Government that fund for the procurement of the foods were sourced from the donations from well-meaning Nigerians through her Get-Involve-Pprogramme, a unit of her Future-Assured-project

She also said she is interested in the success of the Federal Government headed by her husband, President Mohammadu Buhari.

“What I am after in particular is the success of my husband’s administration and he can’t do it alone except with the help of the governors, their wives and all members of our progressive party,” she declared at the flag off of nutritional foods and household utensils to Internally displaced persons who recently returned to their communities.

She said she was happy that the flag off of the food distribution took place, noting that it was in fulfillment of her husband’s campaign promise to resettle displaced victims of Boko Haram insurgency and rescue all citizen abducted or held by Boko Haram including the Chibok girls.

“We thank almighty Allah that we have started fulfilling some of the campaign promises that we made. This is the essence of leadership; you make a promise and then fulfilled it. We thank my dear husband who make sure peace is returning to the northeast states,” she said.

Wife of Borno State governor, Nana Shettima commended Mrs Buhari for the distribution, adding that it was the third time the First Lady would visit the state to attend to the humanitarian challenges of Borno people. She assured that she will continue to collaborate with Mrs Buhari’s Future Assured project through her Support for Widows, Orphans and Tsangaya (SWOT) programme.

PRNigeria noted that her delegation were flown to Maiduguri Airport in a Jet before proceeding to Kaga town in an helicopter.