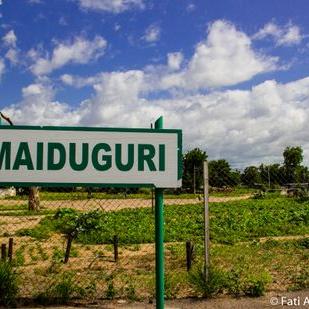 “At the peak of the insurgency crisis in 2013 and 2014, we had so much business coming in that we had no time to eat”, says Usman Ahmad Balarabe Ahmad Geidam, one of Maiduguri’s most popular realtors in his office on Damboa Road. There is no power and the lighting in the office is very poor, so his loud voice booms through the walls of the room unencumbered.

The 41-year old who hails from Geidam village in the neighbouring Yobe state is one of the most popular realtors in Borno state, hotbed of an insurgency crisis that began in 2009.

“People were selling their houses so much; some would come and drop their keys here in this office”, he says, tapping his table. “We would sell from here and transfer the money to them. I even sold one house worth N15m on Pompomari Road for just N3.5m because the owner was desperate.”

In 2001, the same year that he graduated from the city’s university with a degree in Public Administration, Bala Geidam set up shop, opening Dolphin Enterprises to receive Chinese investors who had been invited by the Mala Kachalla administration.

“The Chinese investors came into my father’s sitting room with short knickers for our first meeting. So I decided to open an office after that.”

During the crisis, he, his partner and his seven employees abandoned the office for fear of their lives. They took calls from opposite the building or worked from the safety of their houses, acting as middlemen for other residents of Maiduguri, especially those in the troubled areas. Whenever he got in, someone would mention that Boko Haram had just extorted money from people in the building.

One of Bala’s friends was an informant to the military and was responsible for some of their crackdowns on the terrorists. After a raid on a hideout that turned out to be empty, the soldiers turned on him for tipping them too late, beat him black and blue then detained him in their guardroom at Giwa Barracks, also within the city. For months, no one was sure if he was alive or dead.

The answer came with a Boko Haram attack on the barracks in March 2014; most of the detainees were released and either joined their liberators or went off into the wild. “We saw him in the video the insurgents released, looking as thin as a stick”, he says, his left hand wrapping the forefinger of the right hand, to show the weight loss. “But no one knows if he is missing or dead.”

His widow and six children now survive on the meagre earnings she ekes out from selling shelled groundnuts, supported by the pittance her 16-year old son makes from freelancing as a laundryman or farm hand.

When Africa’s richest man, Aliko Dangote visited in May 2016 and donated relief items, Bala scrounged to get some for them and many others. “It was just 1 small bag of rice, 1 carton of noodles, vegetable oil and sugar for each of them but you need to see how they were thanking me like it was something big.”

“They are so many – you can’t help everyone. One small boy roams around here a lot; after watching him for a few days to be sure he wasn’t Boko Haram, I called him. He has no father but his mother, stepmother and about six siblings are in one of the camps. I gave him money to buy Sallah gifts for them and to start making caps so they can feed. The IDPs need to settle, government needs to help them.”

Now that the peace has returned, business is booming again. Those in Baga Road, Pompomari and State Low Cost Housing Estate, areas of the city that were previously under siege in those times have started returning. “Some of them come here and ask for their keys, leave their new houses here in the centre of town with up to 6 months’ rent remaining and say, ‘help me find someone to rent it’.”

Business is booming again. Maiduguri is crawling with journalists and NGOs who need accommodation and Bala is happy to help.

“They have to help my people and I make things easier for them. I make money, they get room and everybody is happy.”

Article originally published here, we are republishing with permission from the writer….

NLC President Says “Most Countries” Unhappy Nigeria Is The Giant of Africa, They Want Disintegration