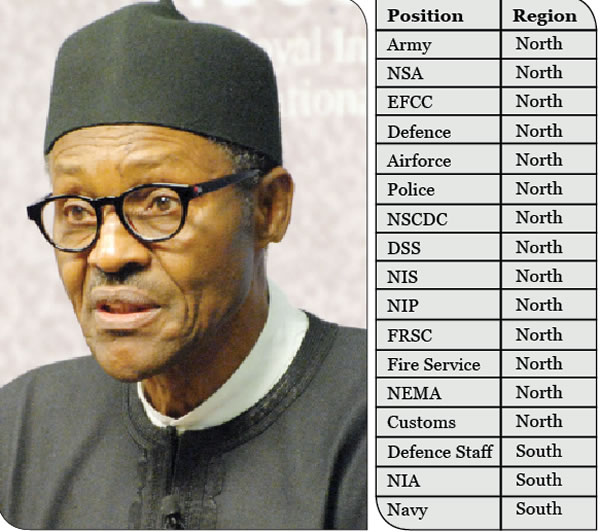 Since the assumption of Nigeria’s President Muhammadu Buhari as President of the Federal Republic of Nigeria, his appointments continue to elicit reactions with Nigerians from all parts of the country accusing the President of bias in his selection..

Buhari who is Hausa/Fulani from Katsina has continues toto favour a particular section of the country. NewsWireNGR is republishing findings by a Nigerian National Daily…

PUNCH Findings have showed that 14 of the nation’s 17 security agencies are currently being headed by northerners; only three are from the South, while the majority of them were appointed by President Buhari.

For instance, the current Minister of Interior, Lt.-Gen. Abdulrahman Dambazau (retd.), under whose purview are the Nigeria Prisons Service, the Nigeria Immigration Service, the Federal Fire Service and the Nigeria Security and Civil Defence Corps, hails from Kaduna State.

Also from Niger State is the Commandant-General of the Nigeria Security and Civil Defence Corps, Abdullahi Muhammadu. The Director-General of the Department of State Services, Lawal Musa Daura, is from Katsina State.

All of them are from the North.

However, the Chief of Defence Staff, Gen. Abayomi Gabriel Olonisakin, is from Ekiti State in the South-West.

But the Chief of Naval Staff, Vice Admiral Ibok-Ete Ekwe Ibas (Cross River State) is from the South.

The heads of security and safety agencies, who were appointed by former President Goodluck Jonathan and have not been replaced, are the Comptroller-General of the Federal Fire Service, Joseph Anebi and the Director-General of the National Emergency Management Agency, Sani Didi, from Kaduna State. They are both from the North.

The only Jonathan appointee in this category who remains in the office is the Director-General of the National Intelligence Agency, Ayo Oke, from Oyo State.

One of those who criticised the imbalance in the distribution recently was the Secretary General of the Igbo socio-cultural group, Ohanaeze Ndi’gbo, Dr. Joe Nwosu, who said the appointments so far had not reflected the Federal Character as embellished in the country’s Constitution.

He said, “We have been crying out loud since the first appointments — of the ministers were made — when out of the 36 ministers, 24 were chosen from the North. Now that other Nigerians are complaining, it means we are not alone. As a tribe, we have had a long history of marginalisation from governance in Nigeria.

“The President said the appointments were made on merit, so are we now saying that only the Northerners have merit? Where is the federal character which we talk about in Nigeria?”

Nevertheless, two days after the outrage by the southern groups, President Buhari on Monday removed the Minister of State for Petroleum Resources, Ibe Kachikwu, as Group Managing Director of the Nigeria National Petroleum Corporation and replaced him with Dr. Maikanti Kacalla Baru.

The President also approved the composition of the Board of the NNPC as provided for under Section 1(2) of the corporation Act of 1997, as amended.

The new board would now have Kachikwu as its chairman, while most of the members are northerners. Members of the board are the Baru; Chief of Staff to the President, Abba Kyari; the Permanent Secretary of the Ministry of Finance; Dr. Thomas M.A. John; Dr. Pius O. Akinyelure; Dr. Tajuddeen Umar; Mr. Mohammed Lawal, and Mr. Yusuf Lawal.

The cries of marginalisation, especially from the southern part of the country, did not start now. The criticisms had begun from the first sets of appointments made by the President.

It is mandatory for the President to appoint at least one minister from each of the states in the country to form his cabinet. However, apart from ministers, the President has the powers to appoint whoever he chooses as member of his kitchen cabinet and head of parastatals, agencies, institutions and departments, including members of their boards – who are far more than the presidential cabinet.

For instance, before ministerial nominations were made and the ministers were sworn in on November 11 – about six months after Buhari came to power – the president had appointed a number of Nigerians – mostly northerners – into different non-political and executive offices.

By the end of July 2015, the president had appointed nine persons as aides and heads of departments and agencies. Eight of them were from the North, while one was from the South.

By the end of August 2015, of the 30 appointments made by the president, only seven of them came from the southern part of the country, while the rest were northerners. And out of those from the South, none was from the South-East geopolitical zone.

While the alleged lopsided appointments generated protests from within and outside the All Progressive Congress, Buhari had defended his appointments in an interview with BBC Hausa on September 9, 2015, saying he chose those he could trust and who he had worked with over the years.

He said, “If I select people whom I know quite well in my political party; whom we came all the way right from the All Nigeria’s People Party, Congress for Progressive Change and APC, and have remained together in good or bad situation; the people I have confidence in and I can trust them with any post, will that amount to anything wrong?”