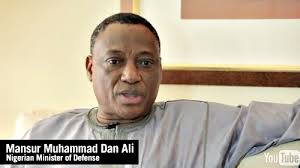 Defence Minister, Mansur Muhammad Dan-Ali Monday waded into the controversy surrounding thy alleged purchase and ownership of houses in Dubai by the Chief of Army Staff, Lt. General Tukur Yusuf Buratai, saying the allegations was part of attempts by unpatriotic and disgruntled elements to distract the leadership of the armed forces from the successes of the war against terrorism.

A statement signed by Brigadier General MS Ahmed, Principal General Staff Officer (PGSO) to the minister on his behalf, said, “The ministry of Defence has observed with dismay, the media report on involvement of the Chief of Army Staff and his family over ownership of property in Dubai. It is noteworthy that there has been series of concerted efforts in the past by some medium and its cohorts to tarnish the image of the person of Lt. General Tukur Buratai for reasons best known to them which failed to achieve their desired ulterior motives”.

“The ministry of Defence view this as an attempt by some unpatriotic and disgruntled elements to distract the leadership of the Nigerian Armed forces from the successes of the war against terror particularly in the North East”.

“It is on record that Lt. General Buratai has declared his assets as Commander Multi-national Joint Task Force and as Chief of Army Staff to the Code of Conduct Bureau. These facts are verifiable with the Bureau.

“The ministry of Defence while appreciating the role of the media in nation building wishes to equally advise the media to exhibit high sense of professionalism in the discharge of their duties especially when it comes to security and defence related matters”.

“We assure Nigerians that this government will not habour personalities with dubious character. Therefore, the online media report should be disregarded in its entirety”, the minister said.