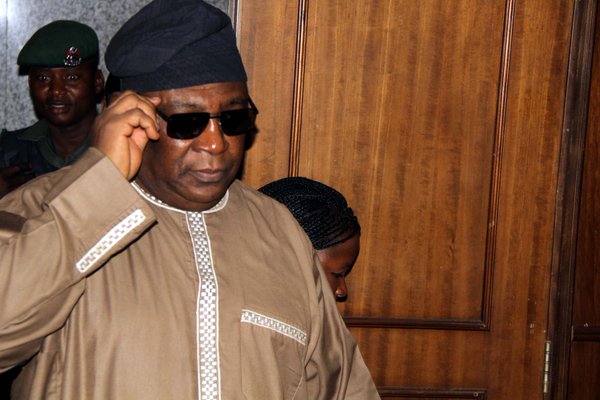 The trial of a former Chief of Defence Staff, CDS, Air Chief Marshal Alex S. Badeh (retd.) and Iyalikam Nigeria Limited by the Economic and Financial Crimes Commission, EFCC, before Justice Okon Abang of the Federal High Court sitting in Maitama, Abuja continued on Thursday, June 16, 2016 with further cross-examination of prosecution witness, Mustapha Yerima, PW4, a builder who allegedly assisted Badeh in procuring a piece of land and building a plaza in Abuja.

During cross-examination by the defence counsel, Akin Olujimi, SAN, Yerima maintained his earlier statements that he was given the dollar equivalent of N304m, which he gave toBureau de Change ( BDC) operators who credited his accounts on different dates.

“Air Commodore Salisu Yushau, who testified as PW1, told me that my payment would come from the Nigerian Air Force, NAF. He introduced me to Air Commodore Sinni who happened to be the CFO in charge of payment.

“The balance of the N450m, in its dollar equivalent, was paid by Air Commodore Yushau in cash, which I received at his house and took to the BDC to convert to Naira.

“All payments made to our company’s accounts were as a result of the meeting with PW1 (Yushau) and Sinni, where PW1 told Sinni to pay a total of N865m.”

Yerima, who also recalled expressing his surprise at the fact that Badeh never visited the site during construction, added: “Perhaps he visited the site after closing hours because you can’t inject such money and not see what you are paying for.

‘‘When EFCC operatives came to the site of the construction, I called PW1 (Yushau) who said I should protect him and that I should get in touch with Alex Jnr., who will link me up to his father, Air Marshal Badeh.

“I spoke to Alex Jnr., who told me that his father wasn’t around. He told me he would call me back. I believe that after he had communicated with his father and PW1 (Yushau), he called to tell me that Yushau would call me with instructions on what to tell the EFCC.

“Soon after that, Yushau, conveying the outcome of their meeting, called and told me to find a way to claim the property.

“As a good businessman, the first thing that comes to mind in this situation is to protect your client. But when it is deemed necessary, you say the facts as it is. One will be left with no choice, but to tell the truth. It is not an easy thing to face the EFCC.

“After all of this, we rendered technical support to the Nigerian Air Force on a contract basis. We were engaged under the administration of Air Marshal N.D. Umar and were paid strictly on valuations.”

However, counsel to the prosecution, Rotimi Jacobs, SAN, intervened, saying, “The way he (Olujimi) is questioning the witness is an attempt to get contradictions at all costs!”

The matter has been adjourned to June 28 and 29, 2016 for further cross- examination and continuation of trial.