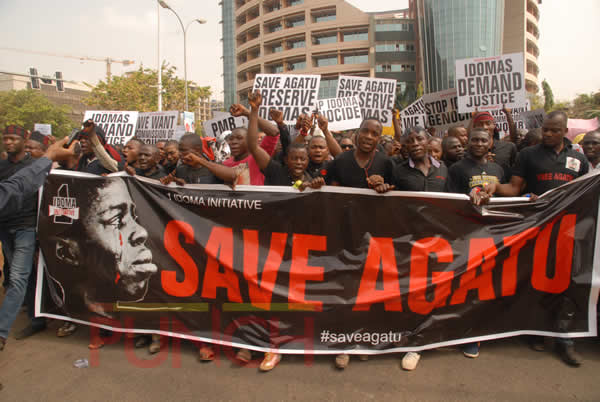 The people of Benue State are asking for N100b compensation for the attacks on Agatu area of the State by unidentified Fulani herdsmen that led to loss of lives and destruction of property.

The Inspector General of Police (IGP), Solomon Arase, who said President Muhammadu Buhari directives in March led to a flurry of activities, however disclosed that 18 people have been arrested in connection with the Agatu attacks.

He however disclosed that the police was yet to gather enough evidence to prosecute the suspects.

Thursday at the continuation of a House of Representatives public hearing on Agatu killings by unidentified Fulani herdsmen, the IGP told Committee on Police Affairs that efforts were made to put in preventive measures after interactions with governor Samuel Ortom and town hall meetings held with communities in Benue and Nasarawa States over the incidents.

While he affirmed that security reasons would not allow him to divulge some sensitive information publicly, Arase said the police was willing to work with vigilante groups, while beefing up the Benue State Police Command with intelligence, more personnel and technology.

However, in his presentation, MUT President General, Edward Ujege said about 500 people were killed in the attacks while asking for N100b in compensation.

Ujege, who said the attacks were deliberate and professionally executed, lamented the deterioration of relationship with the Fulanis that had barely 50,000 herds of cattle in 2010 but by 2016 having more than a million in the State.

Saying that the herdsmen attacks took place in 14 out of 23 Local Government Areas of the State, Ujege also aleged that chemical weapon might have been used by the herdsmen that have killed thousands since the outbreak of the attacks.

He said: “The herdsmen have ransacked whole communities in Benue and other parts of the country, plundered, killed and chased everyone out; and are now comfortably settled on these lands.

While he disregarded suggestions for grazing routes, Ujege said cattle ranching is the solution, adding that cattle rearing should be treated as a private business.

The Deputy Governor, Benson Abonu said the issue of herdsmen attacking communities should not be treated with levity because “There is more than meet the eye” over the issue going by the manner of execution the attack.

According to him, the attacking herdsmen were seen in black uniforms.

He said the State government has only one position on the solution to the issue, which iscattle ranching.
Number of those killed in the incidents however varied with MUT puttng it at 500, the Nigerian Security and Civil Defence Corps (NSCDC) puts its own figure at 300 in its presentation while the IGP said the police can only find three.

The Committee however tasked the Nigerian Immigration Service (NIS) to step up its responsibility by identifying Fulanis that aren’t Nigerians.

The Committee also want the attacking herdsmen to be recognized as terrorists to enable the State subject them to the laws of the land.

Representatives of Miyetti Allah failed again to attend the second day of the hearing before it was adjourned indefinitely.

Economic Crisis Forces US Carrier, United Airlines To Cancel Houston To Nigeria Flights, Its Only Flight To Africa