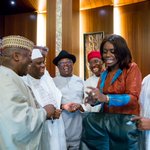 President Muhammadu Buhari has approved the suspension of monthly deduction at source, for this month, for States that received salary assistance loans from the Federal Government and no such deductions would be made this month from the FAAC allocations to the States.

According to Laolu Akande, Senior Special Assistant on Media and Publicity in the Office of the Vice President, the decision was revealed at the 66th National Economic Council (NEC) meeting which held on Thursday, presided over by Vice President, Prof. Yemi Osinbajo, SAN.

The decision is meant to give the States some financial relief at a time the FAAC allocations are dwindling due to the drop in oil prices as Prof. Osinbajo added that the President will continue to review the situation of the States on an ongoing basis and take appropriate relief measures as necessary and possible.

Giving an update on states that have received bailout funds, the Governor, Central Bank of Nigeria (CBN), Godwin Emefiele reported to the Council that a total sum of N689.5 billion has now been disbursed as salary assistance loan to States and an additional N310 billion disbursed as Excess Crude Account-backed loans to States.

On excess crude proceeds, the Minister of Finance, Kemi Adeosun, told the Council that the Account as a balance of $2.3 billion.

Prof. Osinbajo informed the Council of the reconstitution process of the Niger Delta Power Holding Company, NDPHC, with representatives from States based on the six geo-political zones as follows:

He revealed that the document serves to address current overlaps, streamline the role and responsibilities of all participants in order to maximize the benefits of investment in road safety management activities as NEC endorsed the Strategy.