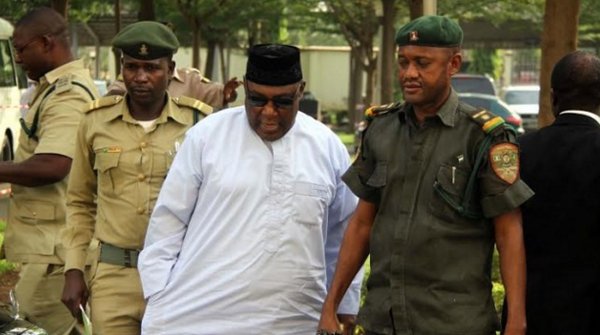 Yishau, who is the first prosecution witness in Badeh’s ongoing trial on money laundering charges, said Badeh diverted N558.2m from the Salary and Emolument Vote account of the Nigerian Air Force throughout the period he (Badeh) served as the Chief of Air Staff.

The Economic and Financial Crimes Commission is prosecuting Badeh alongside a firm, Iyalikam Nigeria Limited, on 10 counts of money laundering bordering on alleged fraudulent removal of about N3.97bn from the Nigerian Air Force’s account.

The anti-graft agency accused Badeh of using the fund to buy and develop landed assets in Abuja for himself and two sons between January and December 2013.

Yishau, who had earlier been led in evidence by the prosecuting counsel, Mr. Rotimi Jacobs (SAN), had narrated how he routinely handed over the dollar equivalent of the N558.2m to Badeh at his official residence in Abuja and how he helped him (Badeh) in using the money to acquire property in various parts of Abuja.

Under cross-examination by Badeh’s lead counsel, Chief Akin Olujinmi (SAN), on Tuesday, Yishau confirmed that the N558.2m was usually converted to dollar every month and the dollar was usually handed over to him for onward transmission to Badeh.

He said, “Mine was to give instructions to Command Finance Officer, who was reporting directly to me. Air Chief Marshal Badeh was not exchanging the money personally, but was given the dollar equivalent.

He said as soon as Badeh took over as the Chief of Air Staff, he (Badeh) appointed somebody who was converting the N558.2m to dollar.

One Year After, Aso Rock Security Operatives Are Yet To Be Paid Their Allowance

China Offers $15m For Establishment of 50 Farms In Nigeria