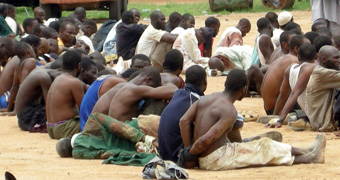 The Attorney General of the Federation, Mallam Abubakar Malami, said yesterday that convicted members of the Boko Haram sect in the country could not be executed because the laws under which they were tried did not prescribe death sentence.

He disclosed this at the launch of amnesty’s report on Global Death Sentences and Executions 2015, in Abuja, yesterday.

The attorney-general, who was represented by Sylvester Imahanobe, also promised to work with Amnesty International to stop executition of convicted criminals in the country, if the international human rights body proposed a bill to that effect.

He said: “Terrorists in Nigeria are tried under the Terrorism Prevention Act which does not carry death penalty.

That is why even those Boko Haram members, who have been convicted cannot be executed because the maximum sentence prescribed by the law is life sentence.”

The AGF said he would be pleased to support any bill that came from Amnesty International on the abolition of death sentence in the country, pointing out that “studies have shown that death penalty has not stopped people from committing crimes.”

Malami revealed that the country was working towards ensuring that the prison system was corrective and not punitive, as it is currently.

They were convicted on terror charges by a military court for their roles in several attacks in Cameroon’s northern region which borders Nigeria.
Cameroon passed an anti-terror law in 2014 which introduced the death sentence.

This is the first time the death sentenced has been used since that law was passed.

The 89 are among 850 people arrested in Cameroon on charges of links to Boko Haram.

Hundreds of people have been killed in a spate of attacks in Cameroon since it joined a regional force set up to tackle the militants last year.