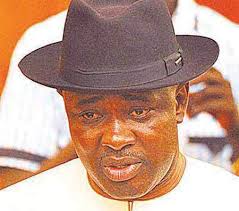 The  All Progressives Congress, APC in  Bayelsa State has  claimed that Minister of State for Agriculture and Rural Development Senator Heineken Lokpobiri is not a card -carrying member of the APC.

Chief Tiwei Timipa Orunimighe, state chapter chairman of the party in Bayelsa State, made the allegation.

It was a  response to Lokpobiri ‘ s denial  of paying former governor of the state, Timipre Sylva, before he was nominated to take the ministerial position meant for Bayelsa State in the president Muhammadu Buhari’s cabinet.

Orunimighe in his reaction to the Minister’s denial, challenged the minister to tell Nigerians which organ of the party issued him the membership card .

He accused him of being a member of the opposition Peoples Democratic Party (PDP), despite serving as minister in an APC government.

“It is common knowledge that the minister has still not resigned from the PDP. We challenge him to produce a dated resignation letter from his party the PDP. He remains an outsider as no organ of the party has issued him a party card as at this moment.

The party which told Audu Ogbe to be careful with sensitive materials when dealing with his junior minister said ” No  wonder he continues to be a mole for a south west PDP governor. We are aware that the federal government understands the risk of keeping a mole at the highest level of government”, he said.