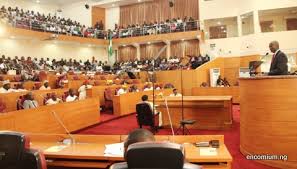 The Lagos State House of Assembly on Tuesday warned President Muhammadu Buhari and his administration of the tension in the country occasioned by the lingering fuel scarcity nationwide.

They warned the government to urgently take steps to avoid a replication of the last Arab Spring because the situation in the country had become unbearable.

“This is the time to be responsible,” the Speaker of the state House of Assembly, Mudashiru Obasa, said adding that it was no longer time to for blame-game as elections were over and the government of the day must show it is up to the challenges facing the country.

Obasa asked that the House do a letter, through its Clerk, Mr. Ganiyu Abiru, to the President urging him to quickly avert what could hurt the peace in the country noting that it had become common to see people carrying kegs of premium motor spirit or petrol about and that this was a waiting tool should there be provocations.

“I saw people carrying kegs all over the city and I understand that some of them sleep at filling stations. This could lead to another danger because what happened in North Africa then started like this.

“Mr. President should look for a solution, we should no longer look at the past or blame the Petroleum Minister for what he said recently since he has apologised. We must take action now,” he said.

The House also appealed to Lagos residents for calm as the biting situation was being resolved.

The issue had come under Matter of Urgent Public Importance in which the House Majority Leader, Sanai Agunbiade, had lamented the plight suffered by residents and motorists especially because of the long queues at the few filling stations selling petrol in parts of the state.

Agunbiade had proposed that the President should identify those responsible for the scarcity and punish whoever is found culpable and that special attention should be given to Lagos state in the distribution of the product.

The Majority Leader said further that the House should call upon Governor Akinwunmi Ambode of the state to direct the necessary agencies in the state to effectively control traffic around all the filling stations in the state.

Agunbiade also urged the House to call on President Muhammadu Buhari to direct all the necessary departments and agencies that have direct connection with the distribution of fuel to proffer solution to the scarcity with immediately effect.

In his contribution, Moshood Oshun, the representative of Lagos Mainland Constituency 2, noted that many residents and workers have lost useful time to the fuel scarcity.

“Many workers sleep in filling stations waiting for fuel and these are the same tired workers you expect to resume work by 7am next day.
“Last Sunday, an ambulance on an emergency was hindered because of the traffic congestion resulting from fuel queues. The driver had to drive one-way and was telling people there was an emergency.

“We know that we have a problem of electricity in Nigeria and people are meant to provide power for themselves, but these same people cannot find fuel to power sets.

“We need to look seriously into this and honestly, there should be scapegoats. The reason why things work smoothly in some parts of the world is because when issues happen, those culpable are punished for it,” noting that one of his colleagues had earlier quoted the Department of Petroleum Resources as claiming responsibility for the scarcity because of an internal battle between some of its members.

The Deputy Speaker of the House, Wasiu Sanni-Eshinlokun, in his comments, explained that the problem was not unexpected as the scarcity could be the result of the removal of subsidy.