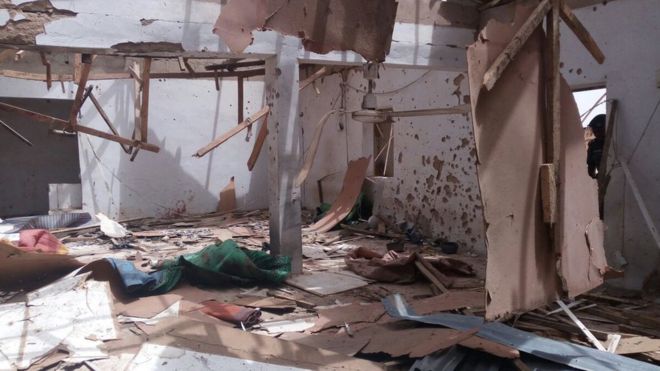 Two female suicide bombers have attacked a mosque in the north-eastern Nigerian city of Maiduguri, killing 22 worshippers, the army says.

The first bomber struck inside the mosque, while the second blew herself up outside as survivors tried to flee, eye witnesses told the BBC.

Eighteen other people were wounded in the attack, the army added.

Maiduguri is the birthplace of Islamist group Boko Haram’s insurgency which has killed 20,000 people since 2009.

“We were just a few metres away from the mosque when a loud bang erupted and all we could see was dark smoke and bodies littered around,” another witness told Associated Press news agency.

The attack took place shortly after worshippers started their early morning prayers, the chief imam of Umarari mosque on the outskirts of the city told the BBC Hausa service

“My hearing was affected by the blast. I can’t hear well at the moment,” he added.

A statement from Nigeria’s army says all the wounded have been taken to a hospital in a nearby town.

Last year, a regional military offensive helped drive out Boko Haram from most of the areas it had seized in north-eastern Nigeria.

However, the group, which is linked to the so-called Islamic State, has continued to carry out suicide attacks in northern Nigeria and neighbouring Cameroon.

Meanwhile, the United States on Thursday said it condemned in the strongest terms the terrorist bombing of a mosque near Maiduguri, the Borno State capital.

Dozens of people were killed and injured in the suicide bombing that took place on Wednesday.

“We extend our deepest condolences to the families of the latest victims of Boko Haram’s senseless brutality,” a statement issued by the US Embassy in Nigeria said.

“Boko Haram continues to commit vicious attacks against innocent civilians, including children. It has demonstrated repeatedly its disregard for the lives of the tens of thousands it has killed, raped, and injured and the millions it has displaced in the Lake Chad Basin region.”

According to the statement, the US government will continue to support those affected by Boko Haram’s violence through ongoing humanitarian aid and victim support services.

“We also remain committed to assisting our partners in the Lake Chad Basin region who are leading the fight to end Boko Haram’s wanton violence and restore peace,” it said.