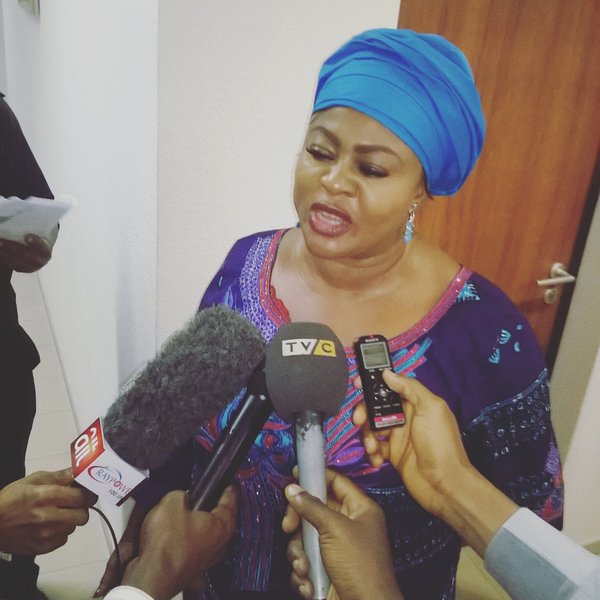 A Federal High Court sitting in Lagos has dismissed a fundamental rights enforcement suit filed by a former Minister of Aviation, Stella Oduah, against the Attorney General of the Federation (AGF) and three others.

The suit was dismissed for want of jurisdiction on Wednesday after the court had postponed its judgment twice.

Justice Okon Abang, who has since been transferred to the Abuja division of the court returned to Lagos to deliver the judgment in line with the new provisions of the Administration of Criminal Justice Act.

The judge ordered the former Minister to pay a cost of 15,000 Naira to the AGF.

Mrs Oduah had filed the suit in August last year, urging the court to restrain agencies of the Federal Government from questioning or prosecuting her over the purchase of two armoured BMW vehicles at a cost of 255 million Naira by the Nigerian Civil Aviation Authority under her watch as the Aviation Minister in 2013.

In her suit, Oduah claimed to have already been probed and exonerated by the House of Representatives Committee on Aviation and the Economic and Financial Crimes Commission and urged Justice Abang to declare that any further probe would amount to violating her fundamental rights.

The respondents in the suit were the AGF, the Economic and Financial Crimes Commission (EFCC), the Independent Corrupt Practices and other related offences Commission and the Inspector General of Police.

Oduah alleged that the ruling All Progressives Congress intended to use the respondents to persecute her, being a prominent member of the opposition Peoples Democratic Party.

She claimed that the Federal Government had perfected plans to try prominent members of the PDP on trumped up charges in a special Lagos State High Court, so as to turn the country into a one-party state.

She begged the court to restrain the respondents from unleashing repression against her.

But the EFCC denied doing the bidding of the APC, claiming that it was independent.

It furnished the court with a petition dated October 18, 2013 written by a lawyer from the chambers of Mr Femi Falana, calling for Oduah’s investigation.

According to the EFCC, the said petition was captioned: “Request for Investigation of Economic and Financial Crimes of the sum of 255 million Naira by Aviation Minister, Ms Stella Oduah”.

The EFCC urged the court to dismiss Oduah’s suit.

But in his judgment, Justice Abang dismissed the EFCC’s objection for not complying with ‘Order Eight Rule One’ of the Fundamental Rights Enforcement Procedure.

“The EFCC did not file any opposition in line with the law,” Justice Abang held.

The judge, however, upheld the preliminary objection filed by the AGF, who challenged the jurisdiction of the Federal High Court in Lagos to entertain Oduah’s suit.

Counsel for the AGF, T.A. Gazali, had contended that since the rights violation that Oduah alleged did not happen in Lagos, it would be a violation of Section 46 (1) of the constitution and Order Two Rule One of the Fundamental Rights Enforcement Procedure to entertain the case in Lagos.

“From the whole of the applicant’s averments, there is nowhere she mentioned that her right was or is being breached by the respondents within the territorial space called Lagos.

“There is nothing to show that the applicant was invited, arrested or detained in Lagos by any of the respondents in the suit.

The judge also held that if the Federal Government had any valid reason to arraign Oduah in a Lagos State High Court as she alleged, it would not amount a violation of her right.

Meanwhile, in another judgment, Justice Abang also refused a prayer to stop the EFCC and the Department of State Services from arresting and probing a former Special Adviser to former President Goodluck Jonathan on Niger Delta Affairs and the Chairman of the Presidential Amnesty Programme, Kingsley Kuku.

The judge dismissed Kuku’s suit for lacking in merit, but restrained the respondents from detaining him beyond 48 hours in contravention of Section 35(4) (5) of the Constitution.

Lai Mohammed Claims Nigeria Was In A ‘Pariah State’ Under Jonathan