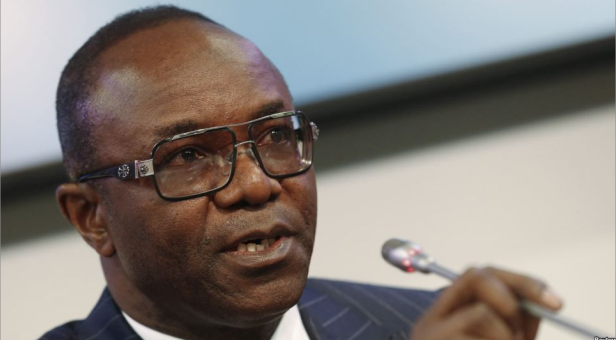 Nigeria did not pay subsidy on imported petroleum products for the month of January 2016 and has thus formally ended the controversial programme that was marred by fraud and irregularities.

The Minister of State for Petroleum Resources and Group Managing Director of the Nigerian National Petroleum Corporation (NNPC), Dr Ibe Kachikwu, who disclosed the development at the House of Representatives on Tuesday, also informed that the federal government would save $1 billion from the Direct-Sale–Direct-Purchase (DSDP) arrangement which he said would replace the crude-for-refined products exchange arrangement popularly referred to as crude swap. The new policy would be become effective in March.

Kachikwu, who appeared before the House of Representatives Ad-Hoc Committee set up to investigate the Corporation’s offshore processing and crude swap arrangement for the period between 2010 to date at the National Assembly, said the new price modulation policy helped remove the multi-billion naira subsidy.

He explained that the DSDP was adopted to replace the Crude Oil Swap initiative and the Offshore Processing Arrangement so as to introduce and entrench transparency in the crude oil for product transaction by the Corporation in line with global best practices.

Under the old order, crude oil was exchanged for petroleum products through third party traders at a pre-determined yield pattern.

But Kachikwu, in a statement issued yesterday by the NNPC spokesman, Ohi Alegbe, noted that the DSDP option eliminates all the cost elements of middlemen and gives the NNPC the latitude to take control of sale and purchase of the crude oil transaction with its partners, adding that the initiative would save $1 billion for the federal government.

He said, “When I assumed duty as the GMD of NNPC, I met the Offshore Processing Arrangement (OPA) and, like you know, there is always room for improvement. I and my team came up with the DSDP initiative with the aim of throwing open the bidding process. This initiative has brought transparency into the crude-for-product exchange matrix and it is in tandem with global best practices.”

According to Kachikwu, the DSDP initiative whittles down the influence of the minister in the selection of bid winners, as it allows all the bidders to be assessed transparently based on their global and national track record of performance before the best companies with the requisite capacities are selected.

Clarifying the need for the introduction of the DSDP, the minister told the committee that the policy is aimed at reducing the gaps inherent in the OPA and the losses incurred by the NNPC in the past.
He stated that the new arrangement would help the Corporation to grow indigenous capacity in the international crude oil business and generate employment opportunities for indigenous companies that are selected.

Kachikwu further informed the committee members that the DSDP initiative gives other government agencies such as the Bureau of Public Procurement (BPP) and Nigeria Extractive Industry and Transparency Initiative (NEITI) the opportunity to be part of the bidding process in order to ensure due process.

Speaking on some of the reported misgivings by some federal agencies over the alleged non-transparent nature of past crude-for-products exchange arrangements, the minister assured that the reconciliation process was ongoing.

He added that, going forward, the ministry would deploy technology to track cargoes and transshipment at the reception depots in order to forestall any incidence of round tripping.

Meanwhile, members of the House of Representatives Adhoc Committee have expressed reservations over the capacity of the present managers of the nation’s oil and gas sector to reposition the sector for optimal benefit.

The lawmakers’ position followed the failure of Dr. Kachikwu, to provide it with satisfactory answers to questions during an ongoing investigative public hearing on crude oil swap arrangement.

The minister drew the anger of the Committee following his repeated attempts to evade questions by providing vague answers on how beneficial the oil swap arrangement was to the nation.

The Committee also asked the minister to inform it on the extent to which due process was adhered to during the bidding process, in addition to what might have led to the determinant circumstances for the agreements.

The Committee however lost its patience with the minister when he asked his subordinates not to commit themselves to figures they were not sure about.

The minister was reminded that he was on oath and needed to take responsibility, and that as he was new on the job, his posture might not help the Committee in its assignment.
He was also told that he had the advantage of subordinates at his disposal to assist in furnishing him with necessary information rather than put the Committee in a tight spot.

Kachikwu, who disclosed that the country had stopped paying subsidy for petrol from over N1 trillion in 2015, however insisted that he could only offer what he was sure of.
He said: “I was invited here without adequate preparation and without notes. There is nothing I have said here that does not show cooperation. Being under oath, I won’t give you what I don’t have fact about. What I expect you to ask from us are documents that we can provide.”

At this point, the Committee reminded him that the invitation letter was explicit about the issue on the table.

The Committee however mandated the Federal Inland Revenue Service (FIRS) to find out whether Trafigura, a non-resident oil trading company, complied with Nigeria’s tax laws, after it was said to have lifted crude oil in the swap arrangement without paying relevant taxes.

The Committee was surprised that Nigerian companies that were involved in the same arrangement paid their taxes while a foreign company was allowed to short-change the country where it was doing business.