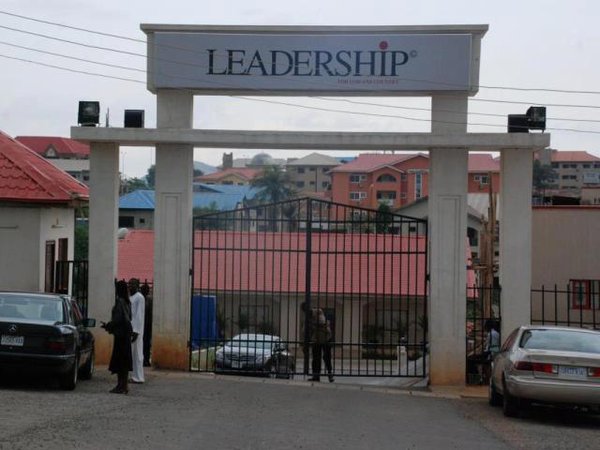 The management of Leadership Holdings Limited, publishers of Leadership newspapers, has returned the N9 million it received from the Presidency through the Newspapers Proprietors Association of Nigeria as compensation for the seizure of its publications in 2014.

In a letter dated January 29 and addressed to the General Secretary of NPAN, the company said it decided to return the money after some senior officials had gone behind to direct their organisations to refund the compensation received from the government even though it was agreed that they committed no offence by receiving the compensation.

It specifically alleged that the chairman of Daily Trust newspaper, Kabiru Yusuf, went behind the association and directed his newspaper to refund the money.

The letter entitled Re: Compensation for illegal seizure of newspapers was signed by the Group Managing Director of Leadership Newspapers Group Limited, Mike Okpere.

The letter obtained by newsmen on Friday said, “We refer to the above subject matter and enclose herewith a Zenith Bank draft no 08549695 for the sum of N9,000,000.00 (Nine million Naira only) being refund of the compensation paid by the Goodluck Jonathan government for the crude and illegal seizure of our newspapers over a period of 5 days by soldiers from the 6th of June to the 10th of June 2014 through the Newspapers Proprietors Association of Nigeria (NPAN).

“It will be recalled that this was the sum paid to all newspapers which incurred losses as a result of the act which was arrived ay when President Jonathan pleaded for an out of court settlement.

“It has come to our notice that the chairman of Daily Trust, Malam Kabiru Yusuf who was acting president of NPAN/chairman of the meeting held at Mr. Sam Amuka’s guest house in Lagos in December 2015 where it was agreed, after a detailed analysis of the situation that NPAN and the newspapers committed no offence by the out of court settlement and therefore had no reason to refund the compensation, has gone behind the association’s back and directed the Daily Trust to refund money.

“After such a dishonourable act by the one person under whose direction members of the association all agreed that there would be no need to refund the money, it is our view that it is no longer tenable not to refund. This is particularly more discomforting when it is recalled that the decision to agree to the out of court settlement and compensation was taken at the Abuja office of Daily Trust with Kabiru Yusuf in attendance. It is for this reason that we are refunding the N9 million.

“But we will like to maintain the general position that neither the NPAN nor newspaper committed any offence. Our chairman has also made it clear that he does not see any situation where LEADERSHIP will be part of any group that will take the current government to court.

“Therefore we should be counted out of any future decision to seek redress in court on this same matter. After all it is not the government that asked us to refund, it is the treachery of some of our members.

Leadership newspaper is owned by Sam Nda-Isaiah, a former presidential aspirant on the platform of the All Progressives Congress.

It becomes the second known beneficiary of the compensation given by the former National Security Adviser, Sambo Dasuki, a retired colonel, to return its share of the money.

The Sun newspaper had earlier in December returned its own share of N9 million.

NPAN had received N120 million from the administration of President Goodluck Jonathan in June 2014 as compensation for the seizure and stoppage circulation of their newspapers by armed soldiers in Abuja and several cities.

Some of the 12 newspapers, which allegedly got the compensation, dissociated themselves from the payments.

Just In: Suicide Bomber Kills Many At A Crowded Market In Adamawa