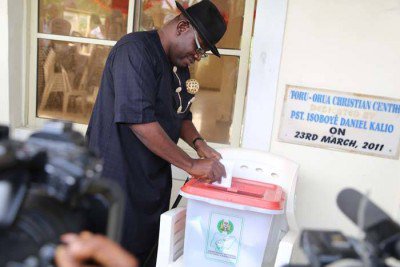 The NYSC members (ad-hoc staff) and election materials ?are secured at the distribution centre at Amassoma by a combined team of policemen and men of the Nigeria Security and Civil Defence Corps with armed soldiers guarding the entrance leading to the centre.

Meanwhile, Voters and observers participating in Saturday’s supplementary governorship election in Bayelsa have commended the performance of card readers deployed for the exercise.

The supplementary poll is being conducted in Southern Ijaw Local Government Area and in 101 units in other parts of the state where the Dec. 5, 2015 election was cancelled due to widespread violence.

The voters, who spoke in some of the polling stations, commended the Independent National Electoral Commission (INEC) for correcting the lapses which the card reader recorded in the December exercise.

“The card readers are performing well and we have no problems with it; INEC did well and corrected the problems noticed during the cancelled polls, last year,’’ Dou said.

At Peremabiri community, a voter, Timi Pokumo, said that he was impressed with the performance of the device.

According to him, in Koulama 1 and Koulama 2, and Okolobama, the card readers were working well and were used for authenticating Permanent Voter Cards (PVCs) and for accreditation.

However, voting and accreditation, which commenced simultaneously in polling stations in Southern Ijaw, did not take-off in some due to late arrival of election materials.

Particularly affected in the delay were Koluama 1, Koluama 2 as well as Peremabiri units where the exercise started by 12 Noon.

In all the units and wards in the local government area, turn of voters was impressive and conduct of the exercise was peaceful.

Catholic Priest, Father Ejike Mbaka Is Pictured A He Arrives Enugu In A Private Jet..