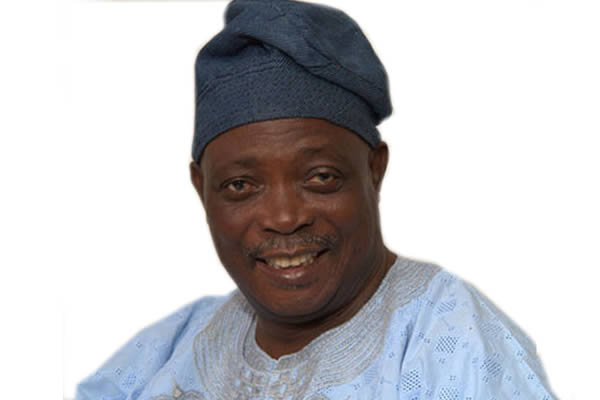 Accord, one of the minor political parties which did not sponsor a candidate in the 2015 presidential election, has confirmed that its leader, Sen. Rashidi Ladoja, received N100m from former Chairman of the Board of Trustees of the Peoples Democratic Party, Chief Tony Anenih, ahead of the election.

Ladoja is a former governor of Oyo State and was the governorship candidate of the party during the last election.

The confirmation of the money he received from Anenih, which was believed was from the $2.1b meant for the procurement of arms, was contained in a letter to the Chairman of the Economic and Financial Crimes Commission, Mr. Ibrahim Magu, by the National Secretary of Accord, Mr. Nureni Adisa.

In the letter titled, “Release of One Hundred Million by Chief Tony Anenih” and dated January 8, 2016, Adisa said that the money was used to money to support the second term presidential ambition of former President Godluck Jonathan.

Jonathan was the presidential candidate of the Peoples Democratic Party in the 2015 election, but was defeated by President Muhammadu Buhari of the All Progressives Congress.

Adisa’s letter to the EFCC chairman read in part, “Our attention has been drawn to a newspaper report that the sum of N100m was released to the Accord leader, Sen. Rashidi Ladoja by Chief Tony Anenih, the (former) Chairman BoT of the PDP.

“We confirm that the sum of N100m was given to the party through our leader after series of meetings between the leadership of Accord and Chief Tony Anenih in preparation for the 2015 general elections.

“The money released was accordingly used for the purposes as stated above.”

Efforts made to get the reaction of Ladoja on Friday were not successful as the former governor didn’t answer calls made to his mobile telephone.

He also failed to respond to a text message sent to him.

The former National Security Adviser, Col. Sabo Dasuki (retd.) was reported to have disbursed varied sums of money to the accounts of some PDP leaders with the aim of using the funds to mobilise for the re-election of Jonathan.

Dasuki, who is currently undergoing trial, is alleged to have diverted $2.1bn meant for procurement of arms and ammunition that the armed forces would have used to fight Boko Haram insurgents.

N260m was reportedly traced to the account of Anenih.

But in a letter to the EFCC, Anenih had explained that the money was a part refund of the money former President Goodluck Jonathan instructed him to release to some political groups for mobilisation and post-election peace advocacy.

The former PDP BoT chairman explained that he was not a direct beneficiary of the money, stated in his letter to the EFCC that N100m was given to the leader of the Social Democratic Party, Chief Olu Falae; N100m to Ladoja and N63m to a group headed by elder statesman, Alhaji Tanko Yakassai.

He said the N260m could not defray the total money, estimated at over N440m that he eventually doled out from his pocket to other groups and individuals on the instructions of the former President.

Both Yakassai and Falae had already confirmed that they received N63m and N100m respectively from Anenih for the purposes specified.