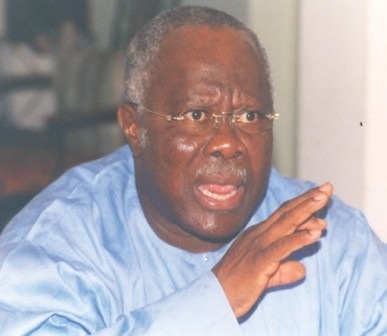 A source at the Economic and Financial Crimes Commission has linked former Governor Peter Odili of Rivers State and a once convicted top member of the Peoples Democratic Party, Bode George, with receiving N100 million each from the former National Security Adviser, Colonel Sambo Dasuki (ret.).

The EFCC source told SaharaReporters that the largess to the two PDP officials was diverted from funds meant for the purchase of arms in order to better equip the Nigerian military in its campaign against Islamist terror group, Boko Haram.

Instead, the N200 million paid to the two PDP stalwarts was designed to ensure the re-election of former President Goodluck Jonathan, who lost the presidential election held on March 28, 2015.

A panel appointed by President Muhammadu Buhari is currently investigating the reported theft of more than $2 billion from the Central Bank of Nigeria (CBN) in the name of purchasing arms. Mr. Dasuki, who was arrested yesterday, initially claimed he stole no funds, adding that Mr. Jonathan approved all his expenses related to arms deals. However, his position changed soon as he was confronted with the statement written by his former director of finance, Shuaibu Salisu who had squealed on all those involved in the scam to investigators.

Nigerian law enforcement agents have so far arrested twenty one persons in relation to the arms purchase scandal. Those under detention or arrest include former senior staff of the office of the National Security Adviser, a former state governor, Attahiru Bafarawa, and the owner of African Independent Television (AIT) network, Raymond Dokpesi. All the arrested suspected are being interrogated in connection with money laundering.

Yesterday, the former NSA, Mr. Dasuki, joined the other suspects at the offices of the EFCC. Agents of the Department of State Services (DSS) handed Mr. Dasuki over to EFCC operatives who have begun questioning him on how he allegedly diverted funds meant for arms purchase into Mr. Jonathan’s re-election campaign.

An EFCC investigator told SaharaReporters that some of the detained suspects were now providing useful information after almost all of them initially exhibited resistance.

AIT proprietor, Mr. Dokpesi, has openly asserted that he received funds from the NSA to run publicity for the Jonathan and PDP campaigns. An official of the EFCC told SaharaReporters that it was “unbelievable for the NSA [National Security Adviser] to be the person allocating money for political campaigns.”

Mr. Bafarawa, whose detention was approved by a court order, has stated that he received N4.6 billion from Mr. Dasuki for “spiritual purposes.” Our EFCC source said their agents were still questioning the former governor to explain what was meant by “spiritual purposes.”

Our source revealed that Mr. Odili and Mr. George “may soon be invited to explain why they received N100 million each from funds budgeted for arms purchase.”

The case of Bode George is instructive, at a thanksgiving service held by him after his release from prison in 2011 in Lagos a Lagos priest delivering a sermon entitled, ‘A minister and a witness,’ Venerable Tayo Aduloju had this to say according to Punch newspaper: “If you are involved in any shady deal; if you are found anywhere elections are rigged; and partake in any form of manipulation, it means you have not learnt anything from your experience. Real power belongs to God. It does not belong to PDP. It does not belong to any president.

“As from today, you are expected to represent Christ. You are an ambassador of Christ. Never again will the name of God be soiled through you.”

Aduloju also charged politicians to shun thuggery, rigging and avarice so as to return the country on the path of decency.

He said, “Shun thuggery. Shun violence. Shun greed. Shun rigging and whatever that can cause trouble.”

Mr. George later denounced this priest at a press conference.