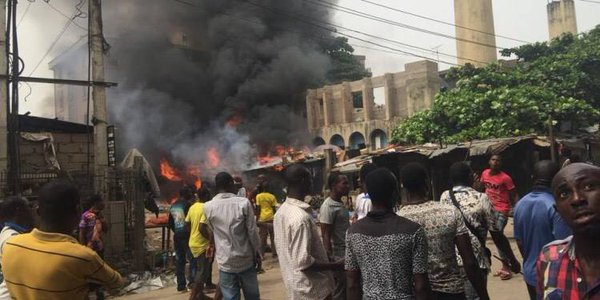 The peaceful protest embarked upon on Tuesday by the Indigenous People of Biafra, IPOB, against the continued incarceration of Mr. Nnamdi Kalu the Radio Biafra Director, turned bloody at about 1.30 am early hours of Wednesday, after an alleged encounter by the Joint Military Taskforce comprising, Army, Navy, Police and Civil Defense, who clashed at Niger Bridge Head with some members of the IPOB who vowed to continue their blockage of the bridge for three days until Kanu is released.

This came as the Inspector General of Police,Solomon Arase, warned that the Nigerian Police Force, NPF, will henceforth, arrest and prosecute persons found to be engaged in the breakdown of law and order by way of protests,especially in the old eastern region.

Vanguard Newspaper reports that Miscreants on hearing that some people have been shot dead by the joint Military taskforce went into another protest, marched to the Central mosque at near Onitsha Main Market and set it, a Hilux Pick Up van with federal Government number was also burnt when the Joint Military Taskforce held motorist and commuters hostage at Upper Iweka with sporadic shooting that has never been witnessed before in Onitsha.

The encounter left about nine people dead, five at Niger Bridge Head, three at Obodoukwu Road, a Suya meat seller said to have been hit by stray bullet who died instantly.

In a statement made available to newsmen by MASSOB Acting Leader, Uchenna Madu which reads in part,”the setting of Ontisha Central Mosque,vehicles ablaze and making of burning fires which depicts violence are not done by the members of IPOB or MASSOB under my leadership.

“This unwarranted acts of violence are perfected by hoodlums sponsored by agents of the Federal Government to create impression that non violence and peaceful pro-Biafra group have turned violent on our agitation for Biafra. Our oppressors are no longer comfortable. There is no evidence of terrorism in our protest. How can we now resort to violence now that we’re told that the presidency is about negotiating with leaders of pro-Biafra group?

“MASSOB led by Uchenna Madu and IPOB led by Nnamdi Kanu have never mandated any person to negotiate for us. Even in this persecution,arrest,killings,clampdown,suppression against us by Nigeria Government,we shall continue and intensify our non violence agitation for Biafra. For Nigeria to release their Armed Forces against non violence,defenseless Biafra agitators shows their wickedness and the devilish mind of President Muhammad Buhari against our people.”