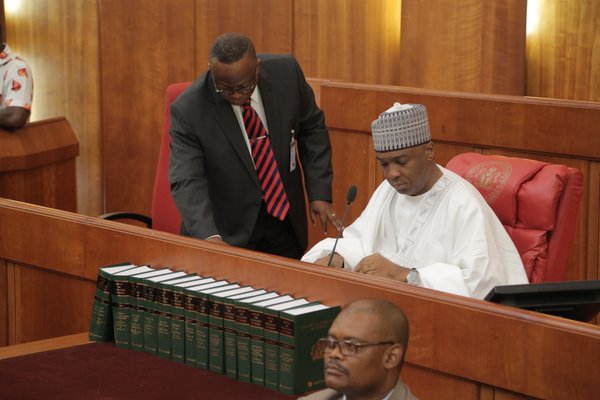 Senate President, Dr. Abubakar Bukola Saraki has dissociated himself from the N60bn arms deal involving the immediate past National Security Adviser, Col. Sambo Dasuki (rtd). Saraki in a statement by his Special Adviser (Media and Publicity), Mr. Yusuph Olaniyonu, stated that contrary to report published in an online medium, Sahara Reporters, he has never had anything to do with purchase of security equipment because in his entire political career he never served in any committee or body which has any link with Defence or national security.

“As a member of the Seventh Senate, Dr. Saraki was not a member of any of the committees which have oversight function on the Ministry of Defence or the intelligence and national security apparatus. If he was tagged the leader of the opposition to the Jonathan administration, how then will he be privy to Arms purchases and have the influence to blackmail any government agency or institution over the release of funds.

“The Senate President would like to alert members of the public to this new plot by this particular online medium, SaharaReporters to tarnish his reputation as the medium and its sponsors pursue the singular objective of removing him from the office of the Senate President, an objective they have since failed to achieve within and outside the National Assembly” This time around, SaharaReporters and its sponsors chose to drag the Senate President to this reigning and current issue of arms purchase by insinuating that he once blackmailed the Central Bank of Nigeria (CBN) to give him and other Senators the sum of N250 million as a way of covering up the arbitrary withdrawal by the NSA from the security fund approved by the former President. First, there is no logic in SaharaReporters’ claim as Dr. Saraki who was persecuted by the last administration could not have had the influence and good standing to walk up to the Central Bank to demand for any money having exposed many atrocities of the past administration.

Again, on what ground would the Senate President blackmail anyone for 250 Million naira? It must be emphasized here that Dr. Saraki will never engage in any sharp practice or issue which will warrant him to blackmail any individual or government institution. “Therefore for record purposes, Dr. Saraki did not collect any money from any official of the CBN in respect of any arms deal. The Senate President also challenge SaharaReporters or any official of the apex bank, Senator, serving or past, who witnessed or participated in any sharing of the alleged money purported to have been received by him, to come out with evidence. “It should be recalled that SaharaReporters believe it can continue to disparage and defame people claiming that it is operating outside the country. The medium cannot operate above the law.

“This same medium had falsely published the data page of a forged passport it purportedly claimed belonged to Saraki. The Home Office in the United Kingdom has since written to confirm that the said passport, does not belong to the Senate President. Also, SaharaReporters once claimed that Saraki bribed some judges using a former Chief Justice of Nigeria as a front. The claim has since been proven to be false. Anybody who knows the reputation of the retired Justice in question knows that he cannot be used to pervert the cause of justice. ”

It also claimed that Saraki tried to cover up the case of $20 billion missing NNPC fund and indeed collected “cash and gifts” from former President Goodluck Jonathan through Mr. Gilbert Chagoury when in actual fact the Senate President was the only member of the Senate committee who refused to sign the majority report of the Makarfi committee because he disagreed with the report which he believed did not address the matter. It is strange however that a man who dissociated himself from the probe report because he believed it amounted to a cover up was later accused by the same online medium as supporting attempts to hide the issue of the missing funds. This is not only completely false, but also a fiction concocted by SaharaReporters to defame Dr. Saraki.

“The game being played by SaharaReporters and its sponsors is clear. As they have done in previous cases involving the on-going trial of the Senate President at the Code of Conduct Tribunal, they are targeting the Appeal at the Supreme Court coming up on Thursday, December 3rd 2015. They want to prejudice the Supreme Court as they have done when they blackmailed a judge of the Federal High Court to withdraw from the case and also published false reports, which compelled the Court of Appeal to postpone its judgment at the last minute. “Whatever the motive of SaharaReporters, it is high time we employed the instrument of the law to stop this act of impunity aimed at publishing false reports believing the victims will not go to court or be frustrated by its dubious claims that they are domiciled outside Nigeria. ” We urge all Nigerians and other well-meaning individuals across the globe to ignore this absolutely false claim by SaharaReporters.

Like we earlier stated, this false claim shall not go unchallenged. We shall meet in court.

“We have allowed SaharaReporters enough latitude to indulge in their unscrupulous and mischievous method of journalism. However, enough is enough. We have no option than to commence legal action against Sahara Reporters in all relevant jurisdictions, particularly on the issue of fake passport, false claim of bribery and the recent one on blackmail, all aimed at tarnishing the image of the Senate President. “We need to put an end to this concerted mischief of defaming the person and good reputation of Senator Bukola Saraki. We will vigorously defend the integrity of the Senate President. We believe law and global best practices should guide these cyber-warriors. They have abused the docility of the law for too long. Enough is enough.”