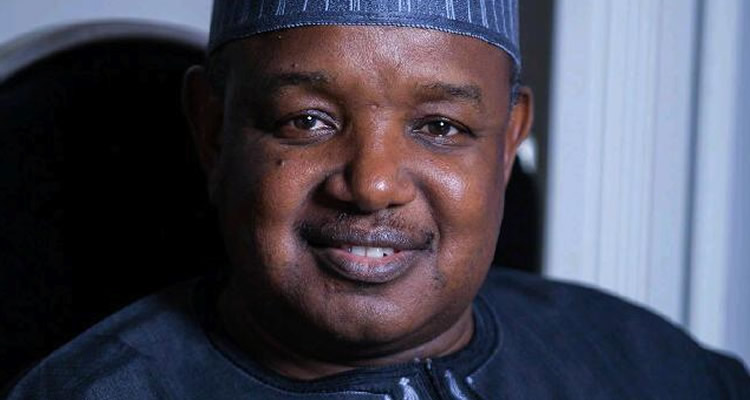 ”My family is one of the rich families of Nigeria. I cannot state the exact figures of my family fortune. I can state that no member of my family needs to work to earn a living” …. Between February 1994 and today, my fortune has considerably increased and a big portion of it comes from funds deposited by the Central Bank of Nigeria in favour of Mecosta Securities, in the book of Goldmann Sachs, Zurich, in April 1997” Abubakar Atiku Bagudu The man who features prominently in Mohammed Abacha’s testimony in the laundering of $700 million cash is Abubakar Atiku Bagudu.

In Case You Missed It, READ!!! Kebbi Governor Bagudu Is Wanted In The U.S Over The Looting Of $600million During The Reign Of Sani Abacha..

He is a business associate of the Abachas who is also being investigated by a Swiss court. Already, Mohammed Abacha has admitted to lawyers that his late father once gave him $700 million cash for safe keeping at his Abuja residence. He also admitted that it was Bagudu that later arranged for the transfer of this money into various accounts owned by the Abachas in foreign banks.

Abubakar Bagudu appeared before a judge in Geneva for three days, last year. Here is what he told the court on 30 September, 1999.

”I am Abubakar Bagudu, a Nigerian citizen, born in Gwandu, in the northern part of the country in 1961. I belong to the Hausa tribe, one of the three major ethnic groups in the country. I first had compulsory primary education in Gwandu, then I studied economics in the University of Sokoto from 1979 to 1983. I then went to another university in Jos from 1988 to 1989, where I obtained my degree in economics. I was an assistantlecturer in the University of Sokoto between 1985 and 1989. Between 1983 and 1984, I did my NYSC for one year. From 1989 to 1991, I worked for Nigeria International Bank in Lagos.

I then went to Columbia University in New York from 1992 to 1993 where I obtained a master’s degree in International Business. In 1993 after my master’s degree, I worked for six months in the World Bank in Washington. I wish to state that my master’s degree was sponsored by the World Bank.
In 1993, I came back to Nigeria. I engaged myself in consulting and international trade with my partner Mr. Ibrahim Turaki. We registered a company under the name EPCEL Ltd., Lagos. We represented the French company Pasteur Merieux Connaught.

We were importing machinery. Up till now, we are still in business and I maintain a home in Lagos, even though I now spend most of my time in London. Mr. Ibrahim Turaki and I have stopped working for EPCEL Ltd., which we sold in 1995. In February 1994, Mr. Ibrahim Sani Abacha, eldest son of former head of state, General Sani Abacha, joined my partner and I to form the company, Morgan Procurement Corporation, Lagos, among others. We were mostly importing vaccines. One of the companies we established is Mecosta Securities Ltd., BVI, in October 1995. We intended to engage in debt recovery and arbitration between creditors and debtors. At the inception of Mecosta Securities Ltd., three of us namely Mr. Ibrahim Abacha, Mr. Mohammed Sani Abacha and myself had equal shares.

Mr. Ibrahim Sani Abacha died in a plane crash in January 1996. On that occasion, Mr. Mohammed Sani Abacha, his brother, the next in line, took up the late brother’s share in Morgan Procurement Corporation. He also took over the shares in Mecosta Securities Ltd. In fact, Mr. Mohammed Sani Abacha and I became equal shareholders in the company (50% – 50%). I have never held political office in Nigeria. However, my family has always been close to power. Members of my family have never held political or public office, with the exception of my father who was a Director of Primary Education in his state, Kebbi State, my state of origin. May I remind you that Nigeria is a federation of 36 states.

Kebbi State shares a border with Benin Republic. Commercially speaking, the state is highly developed because a large quantity of goods transit through it. My elder brother, Bello Bagudu, was elected a member of the federal parliament in February 1999. He is one of the six representing Kebbi State.

Neither myself nor any other member of the extended family has occupied public or political office. As for my business partners, Mr. Ibrahim Turaki was elected governor of Jigawa State in February 1999. Mr. Mohammed Sani Abacha has never held political or public office. However, as I said earlier, he is one of the sons of the former head of state, who died in June 1998.

Talking about money, my family is one of the rich families of Nigeria. I cannot state the exact figures of my family fortune. I can state that no member of my family needs to work to earn a living. Each member of the family is engaged in managing the family assets. As for me, I do not need to work because I have a personal fortune worth tens of millions of US Dollars, though I cannot quote an exact figure. Moreover, my only wife also has a personal fortune, which comes from her family or gifts. My wife is not a member of the Abacha family, nor does she belong to any of the families that once ruled Nigeria. If I am not mistaking, members of my wife’s family occupy no public or political post. I am aware that the judge will ask me about relationship with a few individuals. General Sani Abacha He was head of state of Nigeria between November, 1993 and June 1998, up till his death at age 57. General Abacha took power under the following circumstances: Following June 1993 elections organised by former head of state, General Babangida, a civilian president was elected namely Mr. Abiola. The elections were annulled by General Babangida, officially due to electoral malpractices; as a result of the annulment, there were riots and disturbance of public peace in the country; as a remedy, General Babangida decided to establish a transitional government and appointed Ernest Shonekan head of state. He was overthrown by General Sani Abacha. Before being appointed head of state, General Sani Abacha was a career military officer. He was one of the five most powerful military men in the country.

I met General Sani Abacha for the first time in 1979 in his house in Kano, his native town. I was introduced to him at home, by his son, Ibrahim Sani Abacha, but anytime I met him at home, I used to greet him. He knew I was one of the friends of his son and he knew my name. I do not think he knew any other member of my family. After he assumed power, I continued to meet him in the same manner as before. At no time did I have commercial or business links with General Sani Abacha. Our discussions were strictly limited to political exchanges. After the death of Mr. Ibrahim Sani Abacha, I continued visiting the home of the general as in the past, but this time in company of Mr. Mohammed Sani Abacha. At this juncture, the general became aware of my training, asked me a few questions on the economy, but we never had any business relationship.

As far back as February 1994, Mr. Ibrahim Sani Abacha and myself became business partners and Morgan Procurement Corporation was established thereafter. Our partnership began under the following circumstances: For several years, even before I went on course to Washington, Mr. Ibrahim Sani Abacha, had proposed that we work together; I had been refusing because before 1993, I did not want to work and, in 1993, my job in Washington took most of my interest and time; I agreed to work with Mr. Ibrahim Sani Abacha in 1994 because the latter had a huge fortune and I had a lot of ideas about how to invest or manage the fortune. At that time, my fortune was much smaller than now. Even then, I did not need to work for a living.

Between February 1994 and today, my fortune has considerably increased and a big portion of it comes from funds deposited by the Central Bank of Nigeria in favour of Mecosta Securities, in the book of Goldmann Sachs, Zurich, in April 1997.

In reply to a question from the investigating judge, I explained that there is no direct link between the rise to power of General Sani Abacha in November 1993 and the fact that I accepted in February 1994 to become the business partner of his eldest son, Mr. Ibrahim Sani Abacha. It was only coincidental. However, it is probable that the fact that my new trading partner is the son of the head of state contributed to a large extent to the expansion of our business.

I am aware that my hearing will last at least a whole day, but I am prepared to go through it. I already have appointments tomorrow, but I can easily come back to Geneva. Meanwhile, I am leaving a copy of a diagram showing the itinerary of funds, the third agreement dated 16 August 1999 signed with Nigeria, as well as the draft law negotiated between the parties and which was to be deposited with High Court of London for authentication’.