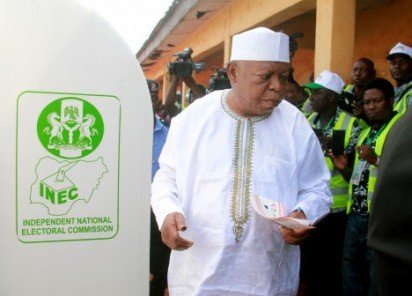 Unknown to many, Kogi State All Progressives Congress (APC) candidate Prince Abubakar Audu died on Saturday – the day of the election he was set to win.

The Nation Newspaper reports that according to a highly placed source within the party, the Kogi APC standard bearer whose death came to public knowledge Sunday evening, actually passed on few hours after casting his vote at his polling unit at Ogbonicha in Ofu Local Government Area.

The source confided in our correspondent that Audu had been feeling quite unwell a day before the election. A doctor was called in to attend to him, pending when he would have been flown out for proper medical attention, he said.

The source, however, expressed disquiet over why the family hid Audu’s death from the public until the following day.

According to him, Audu was found lying ill, “with blood covering his face”, on Friday by a member of his domestic staff at his country home in Ogbonicha. A doctor was called in to attend to him and he managed to perform his civic responsibility the following day.

He added: “Audu was found in his room soaked in blood. In fact, they had to use razor blade to tear his clothes before it was removed from his body. A doctor was called in and he was attended to. He was to be taken to the hospital immediately, but he said he was alright and would be able to vote the next day after which he could be taken to the hospital.

“As you know, Audu voted on election day, but his health began to deteriorate. He died around 5pm on Saturday.”

He said a lot needed to be explained why the family kept his death secret till the announcement of the election result the following day.

He said: “The point is that Mohammed (Audu’s son) was at the collating centre in Lokoja when the results were being announced, and later INEC decided to say that the election was inconclusive, even when the total number of collected PVCs in the 19 local government areas that the commission said there will be a supplementary election cannot invalidate APC’s victory.

“A lot must be explained here. INEC said there are 49,000 names on the voters register in the affetcted 91 polling units, but failed to mention that it is only 25,000 of those that have collected the PVCs. That number cannot upturn APC’s victory, assuming that the PDP wins in all the places, which we all know is impossible. Somebody is up to something sinister here and we will not let it go unchallenged.”

It will be recalled that Hajia Halima Alfa represented the APC during the announcement of results at the INEC headquarters in Lokoja. She, however, did not indicate that there was anything amiss all through the proceeding.

We Are Not Aware Of Audu’s Death, Says INEC