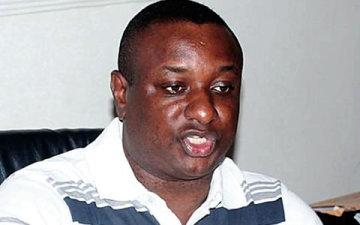 Ousted Chairman of the Economic and Financial Crimes Commission (EFCC), Ibrahim Lamorde is suing the Nigerian Senate over the competence of his arraignment and questioning before its Ethics committee.

The notice served by Lamorde’s lawyer, Mr. Festus Keyamo, was received by thea bailiff of the Federal High Court in Abuja on behalf  of the Senate.

Mr Keyamo, who is a lawyer to the immediate past Chairman of the Economic and Financial Crimes Commission (EFCC), Mr Ibrahim Lamorde, is challenging the Senate and its committee on Ethics, Privileges and Public Petitions on their competence to question his client’s activities while in office.

A statement signed by a private secretary to Mr Keyamo revealed that a letter had also been sent to the Chairman of the Senate committee.

No date has been fixed for the hearing of the suit.

The former EFCC boss had challenged the powers of the Senate and its committee to invite him to appear before them.

In an originating summons filed by Mr Keyamo, Lamorde is asking the court to determine whether the Senate can invite the former EFCC boss to appear before them, as a person whose conduct of affairs is being investigated by them in relation to issues concerning the office he vacated.