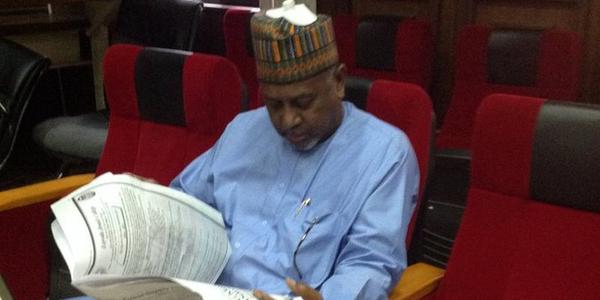 Mr. Dasuki was first arrested by the SSS in July after a prolonged siege on his Abuja home. He was charged to court with illegal possession of arms and money laundering.

Justice Adeniyi Ademola of the Federal High Court last Tuesday granted Mr. Dasuki’s request for his passport to be released, to enable him receive treatment abroad. The former Jonathan’s NSA’s plan to travel on Wednesday night was thwarted by the SSS.

A source who declined to be named for security reasons said the SSS had succeeded in getting a warrant to enable them keep him under house arrest until the next adjourned date.

“The DSS suspects that the former NSA may not return to the country and are therefore, doing everything to make sure he does not leave Nigeria,” the source said.

“Most of them are inside and they have confined him to a House arrest,” PREMIUM TIMES sources said.

NewsWireNGR recalls that Sambo Dasuki (rtd) had tuesday this week floored the Federal Government and Department of State Service (DSS) in one of the first ruling of Federal High Court (FHC) sitting in Abuja, which granted his application for speedy and urgent medical treatment abroad.

The presiding judge, Justice Adeniyi Ademola in his ruling, dismissed the counter argument by the Prosecuting Counsel, opposing Dasuki’s need for medical check-up outside the country.

Justice AdemoIa held that in criminal trial an accused person is assumed innocent until proven guilty and that a citizens health is very paramount in any trial case and before the law.

He therefore ordered for the release of the applicant’s international passports to enable “him to attend three-weeks medical treatment”.

The presiding judge also “ordered the registrar to release the passport to the defendant with a caveat that “when the defendant returns he must submit his passport within the 72 hours to the Court Registrar”.

The former NSA was first charged on Monday August 24, 2015 on a one count charge of illegal possession of firearms but was immediately granted bail on self recognition with Justice Ademola ordering the DSS to submit his seized passport to the court registrar.

On the day of the hearing, the prosecutors brought additional charges bordering on possession of local and foreign currencies against Sambo Dasuki and also sought for Secret Trial of the case.

Concerned about his ill-health, Dasuki asked the court for the release of his travel passport to enable him attend to his personal health issues abroad and as well objected to the secret trial requested by the federal government, preferring open trial of the case for the benefit of the public.

Breaking: Saraki’s Lawyers Accused Of Disrespecting The Court As They Walk Out On Code Of Conduct Tribunal