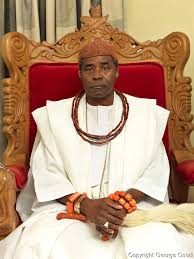 Prince Emiko, said to be about 60, and younger brother to his Atuwatse II, is a graduate of Business Administration from the University of Benin and is believed to be conversant with the traditions of the land.

The Olu designate was summoned and led by his peers to the palace hall for all to see before he was announced by Chief Pessu acting as the Ologbotsere.

Agbakoba Has Faulted The Code Of Conduct For Declaring Itself At Par With Fed. High Court Over Saraki