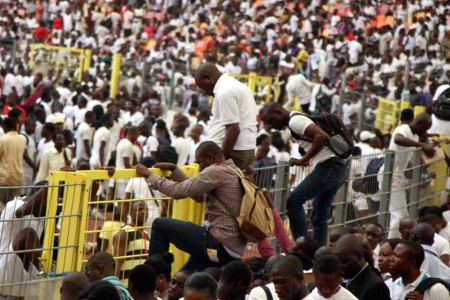 Femi Adesina, the special adviser to President Muhammadu Buhari of Nigeria has disclosed that the Comptroller General of the Nigeria Immigration Services was not suspended because an ISIS chief got a Nigerian visa.

Adesina said in a text message that the suspension of Paradang was not connected to the probe of how the ISIS chief got the Nigerian visa but for unauthorized recruitment into Immigration Service.

The suspended NIS CG who was appointed into office in June 2013 for a four-year tenure was also indicted in the recruitment scandal which led to the death of at least 15 applicants across Nigeria about two years ago.

The Immigration Service has been under focus in the past few days following revelations that Ahmad al-Assir, a leader of Islamic State of Iraq and Syria, ISIS was able to secure valid Nigerian visa in Lebanon.

The ISIS leader who is on international list of wanted terrorists obtained the visa on a fake Palestinian passport and was on his way to Nigeria before he was arrested in Lebanon.

Federal Government had on Wednesday ordered investigations into how the ISIS leader was able to obtain valid visa without detection.

His suspension was contained in a statement signed by the Director of Press, Federal Ministry of Interior, Mr Yusuf Isiaka Alhaji, on behalf of the permanent secretary of the ministry.

The statement said the Deputy Comptroller-General of Immigration, Mr Martin Kure Abeshi, had been directed to take over the affairs of the office.

Abeshi is the most senior officer after Parradang, the statement added.