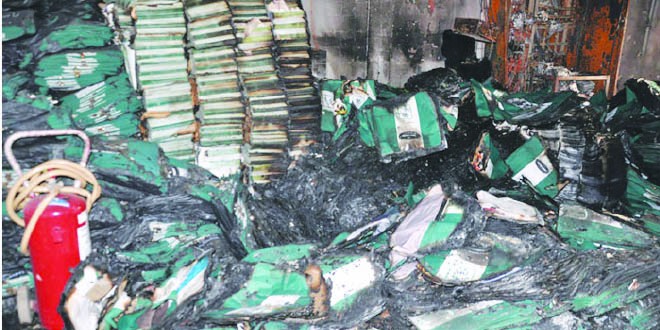 The office of the Independent National Electoral Commission (INEC), in Obingwa local government area of Abia state was Sunday afternoon burnt down by unidentified persons.

According to reports, the incident which occurred at about 1.00pm yesterday razed the entire building including the store and Electoral Officer’s office.

A resident of the staff quarters at the council headquarters at Mgboko where the INEC office were located, who declined to have his name on print told Daily Sun that they saw thick smoke emanating from the INEC office.

“We came back from church and saw a thick smoke around the INEC office. Before we could know what to do, security men had cordoned off the area. The fire nearly spread to the Education and Social Development buildings before it was put off but by then everything had been burnt.”

security agents were manning the area, even as people moved in to see the extent of damage.

As at the time of filing this report, it was not yet clear if electoral materials were burnt in the inferno.

Recall that electoral results from Obingwa LGA are among the areas being contested by the parties at the Election Petition Tribunal.

There are however fears that sensitive materials used in the conduct of 2015 general elections including the ones used for the governorship elections may have been engulfed by the fire.

Enabor Godwin, Abia INEC Public Relations Officer when contacted by newsmen on his mobile phone said he was not aware of the incident.

Abia State Police Public Relations Officer, DSP Ezekiel Onyeke, who confirmed the incident, added that the cause of the fire was yet to be ascertained.

Officials Of The Department Of State Security Storms PDP Secretariat