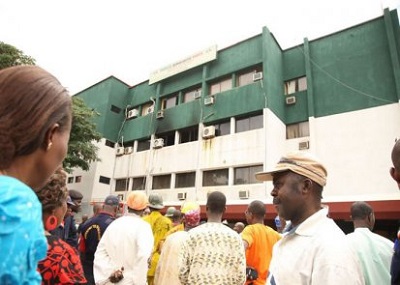 Men of DSS who wore black outfits arrived the Secretariat as early as 9am. Although there was no confirmation of their mission at the party headquarters, it is believed that they were there to forestall any break of law and order over the lingering crisis rocking the party.

The crisis was due to a disagreement between the national leadership and staff over plans to reduce the staff strength, their salaries and allowances by 50 percent.

The men of the DSS reportedly stayed for over 30 minutes during the meeting between the directors and leaders of the aggrieved workers of the PDP.

They also went round the premises of the Secretariat and finally went to the National Executive Committee (NEC) meeting hall before they finally left, may be with assurances that there was temporary peace.