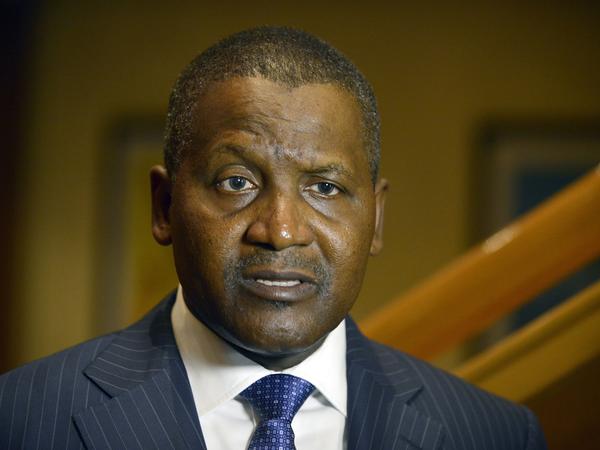 The Nigeria Labour Congress has appealed to wealthy Nigerians like Alhaji Aliko Dangote, Femi Otedola and others to come to the aid of the Osun State workers by donating food items to them because of the hardship they are going through.

The chairman of the NLC in the state, Mr. Jacob Adekomi, made the appeal in an interview with our correspondent in Osogbo on Friday.

Adekomi, who lauded the Christian Association of Nigeria for seeking food aid for the workers, added that it would be hypocritical to claim that they did not need help from outside at this time.

He said that the situation had become very bad among the workers because of the non-payment of the workers’ salaries for the past seven months.

Adekomi said, “The call by the CAN that people should donate food to workers is okay. That will somehow ameliorate the suffering of our people. It is welcome. There is nothing wrong with it.

“We will reach out to them to give us food so that our members and their families will not die of hunger. We need help! Tell me, how much can a civil servant save that will last him for seven months? Our people are hungry and we need help.

“Ramadan is fast approaching. We need food so that our members who will observe the Ramadan will have something to break their fast. Many have been undergoing compulsory fasting, but at least when you fast, you have to break.”

Meanwhile, human rights activists, some workers and the Conference of Nigeria Political Parties staged a protest on Friday to express their displeasure over the unpaid salaries.

The protesters marched from Igbona area to Olaiya Junction in Osogbo where they addressed journalists.

The protest caused a traffic snarl, but the presence of policemen at the scene ensured orderliness.

Armed with placards with various inscriptions such as: “Pay workers and pensioners their entitlements,” and “Aregbesola, bring back our money,” the protesters said they had to use the June 12 Day to seek support for the workers who they described as oppressed.

The Chairman, Centre for Human Rights and Social Justice, Mr. Sulaiman Alimi, said Governor Rauf Aregbesola had failed the people of the state.

He said that blaming the past government for the financial crisis in the state was an act of irresponsibility on the part of the current administration.

Alimi called on the governor to resign, saying he should no longer continue in office since he could not find a solution to the problem.

He said, “I want to say it emphatically that Governor Rauf Aregbesola has failed the people of Osun State because he created this problem by mismanaging the allocation which accrued to the state. This is why he has not been able to pay workers for seven to eight months.”

“I am using this medium to advise Aregbesola to resign honourably from office before he will be sent out of the state. The governor has failed in his responsibility and the people can no longer bear the untold hardship any longer.”

In a related development, the Osun Civil Societies Coalition, which is an umbrella body of pressure groups in the state, has called on the government to devise means of paying the workers’ salaries.

Expressing its sympathy with the workers, the coalition said it would be cruel and ungodly to leave them in their despondent condition.

The coalition’s spokesperson, Mr. Ismaeel Uthman, said in a statement that hunger and poor health ravaging the state workers were undeniable as a result of the non-payment of their salaries.

Uthman said, “We sympathise with the workers in Osun state over their unpaid salaries; we acknowledged how difficult life has been for them because some of the members of the coalition are in the state civil service. We know life has not been easy at all. The statement read, “We dedicate this year June 12 to the Osun State workers. We specially call on the state governor, Alhaji Rauf Aregbesola, to find solution to the non-payment of the workers’ salaries in the state. A hungry man is an angry man and there is no appeal for someone that is hungry. Aregbesola should act fast before hunger leads to death.”

The governor had earlier denied the allegation of insensitivity and financial recklessness being levelled against him over the salary issue.

He had said, “This administration remains sensitive to the welfare of Osun State workers. The financial situation of the state that has made it difficult for the state government to pay the workers’ salaries is disheartening and painful.

“However, no one can establish a single instance of recklessness on the part of this government.

“Those who want to accuse Aregbesola of not thinking enough on how to generate more funds should also ask how his government was able to raise Internal Generation Revenue from N300m to N1.5bn in a spate of four years.”